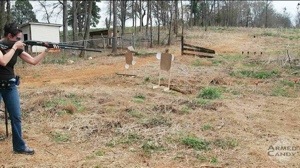 The gong to start with is at 50 feet. There’s another at an angle, so let’s say 60 feet, with four steel poppers inbetween. I am allowed to start moving and engage two silhouettes with two plates attached to each. Dump the rifle with safety on and pick up shotgun. Break nine clays and come around a table to either, knock down five steel targets with shells or dump the short gun and take on the rest with pistol. One silhouette to the right, another with a plate to the left. Two more steel gongs and five steels to knock down at the end.

The buzzer sounds and I engage the closer of the two gongs. The four poppers go down easily, but the furthest gong gives me a lot of trouble. I abandon it and move on… and begin moving. I’m not running, I’m slinking along trying to keep my on target the whole time. Why? I’m not sure. I think I’ve seen too many SWAT movies! I must remember that at 3 Gun, no one is shooting back. I engage the silhouettes, with no idea if I’ve “neutralized” and dump the rifle. I’ve remembered to engage the safety, so proud of myself! Grab the shotgun I’ve staged on the table and tage on the clays. With the option to switch to pistol and an assumption that this will be the easiest part of the stage, I remember to hit the safety and dump the shotgun. Unknown to me (till now), my pistol magazine hadn’t seated at the start, so I now I need to tap and rack. Once again, I have not idea how I do on the cardboard, but these knock downs aren’t nearly as easy as I expected. I struggle even more with the ones set further out. After a mag change and a bunch more attempts, I give up, with one steel still standing.

My time really doesn’t matter because I have nothing to compair it. I got through it! I remembered the rules, my form, all the targets and how they were supposed to be engaged and I am sore as heck!!