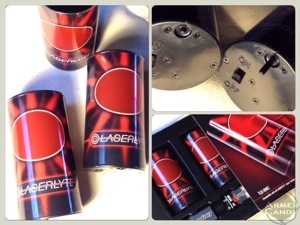 Isn’t dry fire training a great option for winters like these, when the range is an iced over highway away, and ammo is still so hard to find anyway? Too many people don’t value the usefulness of dry firing. I imagine this is due to most people’s understand of the definition of “dry firing,” the inability of the shooter to judge if they are practicing correctly, or the spreading of the syndrome I have recently termed, “Dry Fire Training Boredom.” To combat all three of these issues, and probably a few others, Laserlyte now offers a new training target option, Plinking Cans.

If you saw my reviews of Laserlyte’s first target system TLB-1 and Reaction Tyme target system TLB-RT, then you are aware, that I began utterly dissatisfied but was then highly impressed by each of these two devices, respectively. With the two brilliant Reaction Tyme targets, one can practice speed and accuracy, individually or at the same time. I was so impressed with these, that I had trouble imagining how Laserlyte was going to improve on them. When I got a’hold of the new Plinking Can targets TLB-BWC, I got my answer; They couldn’t. I’m not saying that this new product isn’t fun and useful, but if one had to chose between the two devices, the Plinking Cans would not be the winner.

I started in my home around 10am, taking the Laserlyte Plinking Cans from their box and installing the supplied 9 volt batteries (one per can). Immediately the “plunger,” which is in the bottom of the can and is released by a spring which forces the can to topple when the sensor is struck by a beam of light, pops out and then clicks incessantly. It was impossible to even set up the cans, because the plunger was being continuously released and knocking them over. The reason for this, I was told, was that I was using the cans I too bright a room. My conclusion: a room lit purely by daylight was not an appropriate place to train with the Plinking Cans. The most allowable light one can have while using the Plinking Cans can be found somewhere around dusk with all indoor lighting turned off. I found this a bit limiting, but also realized that if I closed all the blinds in my house (since my place gets less natural light than I would like) I could probably us the Plinking Cans any time of the day.

I set the cans up in the living room, one on a speaker, another on the coffee table… while “The Boy” (my future stepson, a 16 year old video gamer) was distracted by something very important on his iPhone. I took out the compact blue pistol, Laserlyte’s LT-TTC, installed the Universal Trainer LT-PRO, and fired twice until I knocked over one of the cans.
Note: The sights on the compact pistol LT-TTC seem just as off as the ones I had issues with on the full size training gun LT-TT. (If I remember to always hold my shot 1.5″ down, they end up perfect. Not necessarily a practice I want to commit to muscle memory.)
This caught “The Boy’s” attention, so we decided to try a little game. We called it Clear the Room. We took turns setting up the Plinking Cans in a dimly lit back bedroom, and would then time eachother to see how fast we could find and then hit all three targets.

The reactive-ness of the targets was only part of the draw of our game but they made for a much more enjoyable dry firing activity. I doubt I would have inticed “The Boy” with repeated, dry trigger pulls aimed at a spot on a wall, and slide racks after each. It’s far more fun to use the Plinking Cans with a buddy, since they need to be reset each time one is “shot”, but they are definately an affective tool for practicing accuracy. We also considered trying to play “Clear the Room” in the dark and putting a flashlight in the weak hand. This resulted in two realizations. First, a semi-strong flashlight will set off the plinking cans, even if they are not hit by the laser. Second, the sights on the training pistol are black on black, which are useless in a dark room. I ended up painting the front sight on the TTC, but that only helped a little. I’d recommend using one of the laser cartridges Laserlyte offers in a real gun with night sights. 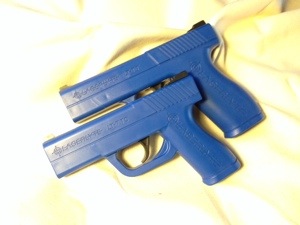 Laserlyte also sent their compact training pistol along with the Plinking Cans, so that I could compare it to the full size LT-TT. As I might have expected, the smaller grip didn’t fit my long fingers as well as the full size pistol. I tested the trigger pull of both (Trigger pull measurement, sponsored by Brownells) and appreciated that Laserlyte differed them slightly. The compact averaged about 4.5lb and the full size came in at 5lb. Personally, I would have reversed these assigned weights and made he difference slightly more significant, but I appreciate the effort.

Over all, I like Laserlyte’s line of training equipment. I am considering setting up a bunch of stages using both the Plinking Cans and the Reaction Tyme targets, and have late night 3gun training in the back yard. Though I doubt a shot timer could pick up on the click of the training pistol, I imagine some fun and affective dry fire training in my future.