I bought a used Beretta 92FS Type M from a friend of mine recently. The 92FS Compact is one of my favorite carry guns, and the Type M is sort of the perfect expression of that, because it’s a single stack 9mm. It holds 8 rounds in the magazine, has a traditional double action/single action operating system, and in every other respect is largely identical to its full size M9 brother, save a shorter barrel. 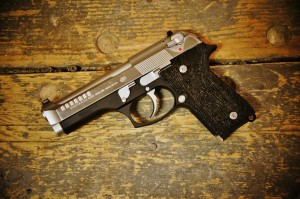 My gun has also been modified, it’s benefited from an action job, stippled grips which look ugly but work, forward cocking serrations, and XS Small Dot sights. More on the sights later. The trigger is one of the best examples of a traditional double action gun that I’ve ever shot, with a clean 11.5 lb take-up in DA mode and a 4 lb in single action.

The quick review consisted of tossing the Beretta into my range bag to shoot when I was heading to the range to do some serious training for Indoor Nationals; I grabbed 100 rounds of PMC 115 grain 9mm ammo on my way out the door. At the range, I found the gun to be pleasant to shoot, superbly accurate, and boringly reliable. Here is a 5 shot group shot from a sandbag at 20 yards: 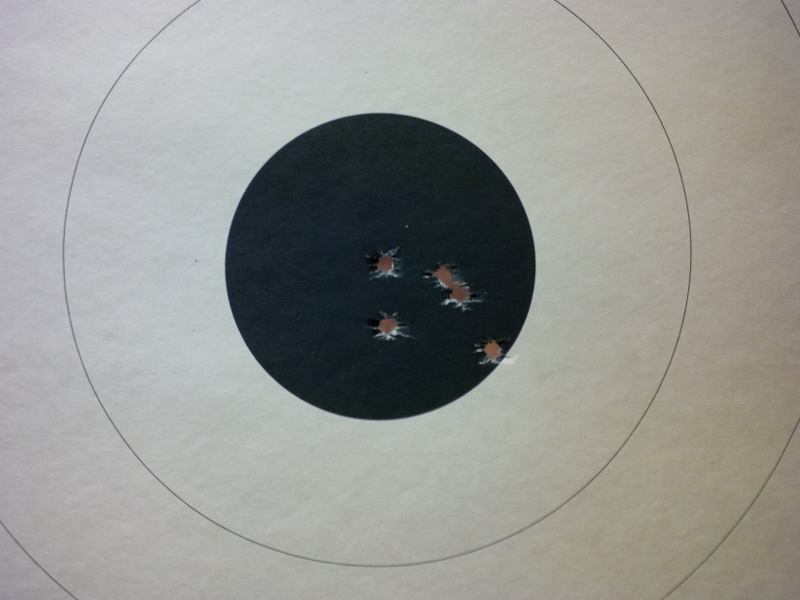 That was with the XS small dot sights. You can shoot good groups with XS Sights, but it takes a lot more work than it would have with proper sights such as Novaks or a similar design. The reason is that your feedback on front sight to rear sight relationship is very gross for making fine shots; and while it’s possible as demonstrated, it requires a lot more attention to detail. That group ended up at about 1.5 inches, I’d like to shoot the gun again with some proper match/defensive ammo to see how accurate it really is. The only thing close to an issue is that magazines that have ammo in them don’t drop free. An empty magazine will absolutely drop free of the gun, but a partial mag won’t and will require you to manually remove it.

The Type M was discontinued by Beretta, which is too bad. In today’s concealed carry revolution, I think it would be a nice fit to Beretta’s lineup, especially now that they’ve brought back the double-stack 92 Compact. If you do manage to find a used Type M for sale, don’t buy it. Send me an email with a link to the auction, and I’ll see that it gets a good home. If you do buy it though, be warned that magazines are made from unicorn horn powder fused with the tears of Chuck Norris and cost roughly eleventy billion dollars when do you find one for sale.

All jokes aside, this really is a great gun. It’s really the only gun that’s ever made me want to be truly unfaithful to my beloved revolvers.