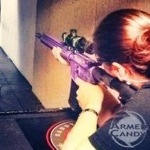 This weekend registration opened for Brownells Lady 3-Gun Pro-Am Challenge. It is the first major match that has been limited to women only. The match is planned for the weekend of October 31, 2014 in Covington Georgia. Registration is only open to 200 women and within 12 overnight hours, well over half the spots had already been filled.

Some might ask why women would need their own major match, when coed matches, with female divisions abound? Why should female shooters not shoot along side the fellas and see where they stand in comparison? My response to these inquisitive folks would be that they must consider the whole picture when it comes to women and guns. The organizers of the Brownells Lady 3-Gun Challenge have created an enticing competitive shooting event. It will allow professionals and beginners to shoot side by side. While some might assume that this would turn into an intimidating situation for those new to the sport, it actually becomes an exciting opportunity.

In an interview last week with Match Director Lisa Marie Judy, I found out that not only would self-squadding allow the ladies to shoot with friends and teammates, but squads would end up a mix of about 1/3rd professional and 2/3rds amateurs. Lisa Marie explained that the pros would be expected to shoot each stage before the rest of their squad and then act as coaches to those women who wanted the help. By creating a helpful learning environment, beginners will feel empowered to jump into the 3-Gun Nation, without down-playing the competition. The whole concept is actually a brilliant exercise in welcoming women into the sport.