There is a conversation in this industry that needs to happen that is getting ignored. In the past week both Peter Barrett and Caleb Giddings have touched on it in their own ways, but my main concern is why it’s being ignored. 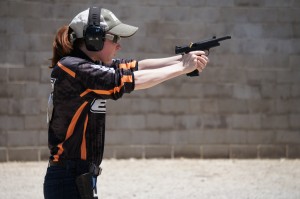 In a conversation with Kathy Jackson at last year’s Women’s Industry Dinner, she described how much SHOT Show has changed as this new market emerges. We are seeing fewer booth babes and more professional women, and many of us would like to see that change continue.

We are experiencing an interesting, though unsurprising, trend within our community, in that a majority of the attention is still given to women who lack impressive credentials but are willing to wear a bikini while holding a gun.

The real problem is not in the existence of these women, nor in their marketing value. If that’s what they want to be known for, who I am to question that decision? However, the ladies in the industry who are legitimate professionals fear calling out the bogus credentials that some of these women flaunt, because we’ll get called jealous, or catty, or any other numerous and less polite names that the Internet invents.

So how, as professional writers, bloggers, shooters, or promoters, do we differentiate ourselves from these women if our objective and legitimate criticisms are overrun with the misogynistic cries of “You’re just jealous!”? I am not concerned about who people choose to like for wearing a bikini and holding a gun. However, if you’re going to call someone a professional shooter, professional trainer, or professional writer you had best know what is backing that up. The dismissal of legitimate concerns and criticisms raised by female professionals simply because both the criticized and criticizing parties are women is not only sexist, but is stifling conversation that could help promote women who are not only attractive but also legitimate experts while minimizing meaningless credentials.