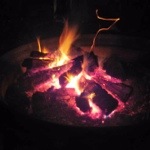 At a New Years party, about an hour after the count down, boyfriend and I found ourselves sitting around a fire with our hosts. They are smart folks, long time friends and deeply rooted southerners (which is why the following conversation surprised me). As will happen around SHOT Show time, my brain is in complete gun-mode, therefore (and I’m not even sure how it happened) the conversation turned to firearms. Our hosts and the other guests may have baited me into a debate by saying,
“I hate guns!”
“I have them, but I wish I didn’t.”
“I wish we could be rid of them all!”

Of course I HAD to respond, “I hate violence, but dude, guns are fun.” I have no qualms about baiting them in return. The group looked at me and blinked. Then the host launched into a story about the time his iPad and revolver were stolen out of his car. When he finished he tried to illustrate the feeling of violation he had gotten from the experience. I said, “You must have felt sick knowing that you put a gun into the hands of a criminal… Not that it’s your fault that you were robbed, but why did you leave the gun in your car?”

Since I was right, he changed the subject. He asked, “you’re a reasonable person, aren’t you in favor of background checks at gun shows?” At this point I realized we needed a vocabulary lesson. To my host, I explained the difference between a sale between a FFL and buyer, and a private sale and showed him how gun shows were not a “safe zone” where laws were different. Once again I was made aware of the media’s ability to skew the public’s understanding of reality.

Having made gun sales as both a private buyer/seller and as part of a retail operation, I explained to our host that a background check could not ensure a person’s future plans with a gun. So I used 4473s as required by law, but not when selling privately. He asked me if I felt guilt for potentially arming a criminal. This question seemed more extreme than any of his others, and a little accusatory. You see, I feel no guilt for selling a gun to a private person with a Georgia Drivers License and a Firearms Permit. However, I’d prefer to know that the person who is buying my gun had recently passed a background check and is “qualified” to own a firearm. Based on the current laws, I have no other options (especially if I want to keep all of the money from the sale, without paying fees and charges). So what’s a girl to do?