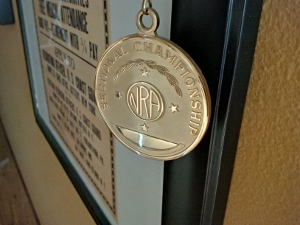 The point is that shooting well is actually hard and there are no shortcuts to the top. I know if I want to win an IDPA Championship, I’m going to have to train my butt off so I can beat some of the best revo shooters in the world.

The difficultly of shooting well is exactly why guys like Robin Brown or Matthew Temkin exist. Guns get wrapped up in ego, so when you’re suddenly confronted by your own suck, it’s awfully tempting to hear the siren call of these clowns. “Shhh, it’s okay” they say as you dump 500 rounds aimlessly into the berm, “that’s how it will be on the street.” Instead of teaching you to excel, they give you an opportunity to hide from your own inadequacies with their pablum of “the streets.” It feels good to shoot a lot of rounds and have a nice old man pat you on the head and tell you that you’re “combat accurate.” It feels good to do drills without a timer and have the instructor (who doesn’t even demo) tell you that he “felt” like it was faster.

If your instructor isn’t using a timer to objectively measure standard drills, you’re wasting time and money. If your instructor doesn’t believe in using the sights ever, he’s a fraud. I understand the temptation of “feel good” shooting, and there is absolutely a time and place for that. If you want to feel good about your shooting, train for a year. Then go to a public range. I guarantee that you’ll feel smug about your shooting for at least a week. But after that, go to a class that kicks your ass.

Feelings are liars. Your feelings will almost always lead you down the path of mediocrity. The best way to feel good about your shooting is to look an objective metric like a standard drill and see your performance on it. Or look at your match scores and how they’ve improved. Then you have something that you’re justified to feel good about.