While it may seem like December just started (because it did), IDPA’s Indoor Nationals, formerly known as the Winter Nationals are just around the corner. Indoor Nationals is a fairly unique match in the action shooting world as it is one of very few national level matches that official incorporates low light and no light shooting in many of the stages. 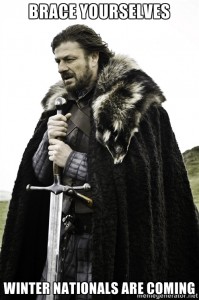 I shot the match once before, in 2012 and I have to say that I really did enjoy myself. I made a bunch of mistakes because I had done almost no low/no light training before the match. I missed it this year due to a scheduling conflict, but I plan on returning in 2014.

Those are most of the stages from 2012. As you can see, a lot of low light shooting, and a lot of tough targets. In 2012, I ran a Gen 4 Glock 21 with Sevigny sights, which was a pretty good set-up, but not quite ideal. The biggest thing I’d want to change would be the sights; not to a different manufacturer but to an illuminated sight. It’s dark as…a really dark place in there, and having tritium on the sights would definitely have helped.

For the 2014 match, I’m going to be sticking to SSR and my beloved GP100. It is probably time for me to do a refresh on my speedloaders, as some of my Comp-IIIs have gotten a little worse for the wear in the past few years from use. However, all my other gear will remain the same, right down to the excellent Blade-Tech holster I’ve been using in SSR for 2 years now.

I’m looking forward to the Indoor Nationals in February, and I hope to see you there at the match!