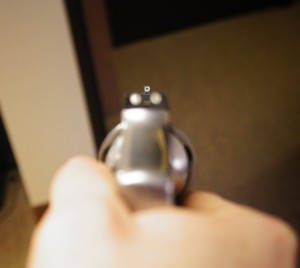 My 640 Pro Series came from the factory with great sights. It’s too bad that the only loads that shoot point of aim with these sights are 158 grain standard pressure LRN. Which would be fine, except the majority of carry ammo on the market these days is in the 110-135 grain range, and is usually pushing about 300-400 more FPS in velocity than standard pressure 158 grain stuff. That means that it shoots really low with sights that are regulated for 158 grain bullets. Out of the 640, multiple samples of +P 125 gr JHP hit 4-6 inches low at 7 yards. I don’t know about you, but I’d rather not have to hold on the top of an IDPA head box to get hits in the chest down zero area.

Now, I understand why things are this way. They’re like this because that’s how we’ve always done it, going back to the days when a lead round nose bullet at 750 FPS was the hot ticket in your .38 revolver. But these days, you’re far more likely to find 130 grain FMJ practice ammo at 850 or faster, and most defensive ammo is going to be 125 grain or 135 grain +P cooking at anywhere from 900 to 1100 FPS. Believe me, that makes a difference on where the actual bullet impacts the target.

I don’t mind having to adjust the sights on guns that come with adjustable sights. I once had a gun from [redacted] that required something like 15 clicks right and 16 clicks up just to get it on paper. But I actually prefer fixed sight guns for self-defense, because less breakable parts are a good thing. So if we could just get those sights regulated for the rounds people are actually using, that would be great.