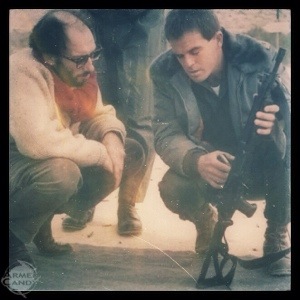 As I fly back to Atlanta after a weekend visiting the folks in New York City, I consider why I have, once again, felt like the odd duck of the family. How many times have they asked me why I am so passionate about firearms, self protection and emergency preparedness. These concepts may not have been part of my upbringing, but they are part of me now. Then again, are they really new to me?

I remember a handful of family trips to Israel when I was young. My father had a number of friends in the Israeli Air Force and during our visits, we might have dinner or even stay on base. Many activities from those trips could be considered foreshadows into my future fascinations.

Pushing buttons while sitting in the gunner position of a functional apache helicopter, falling asleep on a DC-10 transport or running around a dinning hall full of soldiers attempting to shake each one’s hand could have been opportunities every kid had, as far as I knew. These memories help me understand my pride in those who serve and the families who stand behind them, but one memory stands out as a potential root of my firearm passions.

Being a crafty little girl, I went looking for a project after dinner one evening. Eventually, I was handed a live .223 round and a pair of pliers. I had no idea what the round was capable of, but I was told that I was about to make my own bullet necklace like the Israeli teens were wearing. I was psyched! So my father and I removed the bullet from the casing, emptied the powder and replaced the bullet. We drilled a hole through the casing and then threaded a chain through the hole. Back then, this item was a none-issue as we flew back to the U.S., and at school it didn’t seem to bother my teachers either. Could this be how I first fell in love? I’m not sure, but it’s one of my fondest memories (in which I learned nothing about firearms, safety or ballistics).

(This post is dedicated to the loving memory of my father who passed away November 1993. The above photo is of my father, left, while visiting Ramon Air Base in the Israeli desert.)