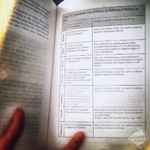 We often talk about the differences in laws of concealed carry from one state to the next but it’s easy to forget the other legal aspects that apply to self defense. After the Zimmerman trial everyone was discussing the “Stand your ground” law, and that got me thinking, what sort of legal stuff should I know before defending myself?

That was right about the time I recieved an email from author, Andrew F. Branca. He asked if I would review the second edition of his book The Law of Self Defense – The Indispensable Guide for the Armed Citizen. The book is offered in paperback as well as digital versions and even though it’s packed with information, it isn’t too big to through in a carry on bag for a weekend away. Then again, I would’t call it beach reading, but I wouldn’t catorgize this book as a pure-fact dry read, or simply a reference book either.

If you’ve ever searched the internet for the same information, you probably found that the number of sites that interpret the law rather than offer you the text, are extensive. But we must be causious of who’s interpretation we accept as fact and when they were last updated. If one can find a site with the actual text of the law, there are usually pages of definitions to get through and the titles of laws are not always as self explanatary as we would like. Even as a student of law, I often have trouble wading through the jargon to understand the issues at hand. However, even if you make it through all this and you think you understand what the authors intended, our American legal system throughs us another curve. Our laws are writen to be interpreted. So no matter what the authors meant when they created the law, it can also be important to find out how judges have upheald the law since it was enacted.

Truely, Branca’s book would be useful to a citizen who was armed with a baseball bat, not just one with a firearm. It begins with the basics of criminal law and puts the main ideas into terms anyone can understand. Then he delves into the heart of a what it means to be an “innocent victim.” Not all defensive acts are defendable in a court of law and anyone who simply believes that they can state, “I was in fear for my life,” and not be arrested, should read this book. Further, The Law of Self Defense helps the reader understand the defense of others and defense of property, and does so while considering he different laws in each of the 50 states. 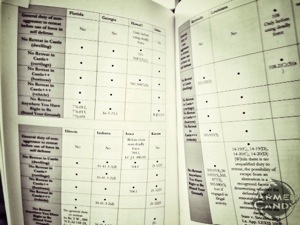 The main issue I found with this book was the formatting. I agree that the table format is the best way to show the data for all 50 states and alphabetical is also ideal! but these broken charts just weren’t working for me. Also an issue with the tables, was that if a state did not have a certain law on the books and it was being discussed in a table in the book, the state was simple, left out of the chart. A few times his omission had me flipping pages wondering if I was missing one or if two had gotten stuck together. Also, sometimes state names were placed along the top of the chart, other times they were along the side. These were not major issues, but they took some getting used to.

In summary, I found The Law of Self Defense a interesting book and useful tool. The real-life stories brought the information to life, and the tables of laws, broken down by state, ensured accuracy in my knowledge. I would recommend checking out Andrew Branca’s book, or at least getting to know your state’s self defense laws, before you NEED them.