I DVR every episode of Shooting USA and Impossible Shots; I don’t always watch every episode but I do when it covers a topic that I’m interested in. On Wednesday on Impossible Shots, Mike Irvine had Jerry Miculek doing some crazy reloading tricks with his S&W 625. Jerry had a throwaway comment in this where he mentioned that a time of 1.70 shot-to-shot was a good par for a revolver reload with moonclips. He further elaborated that under match conditions, anything under 2.00 was “pretty good.” That in conjunction with watching some SnubTraining videos got me thinking about speedloader reloads and the perhaps underappreciated HKS speedloader. 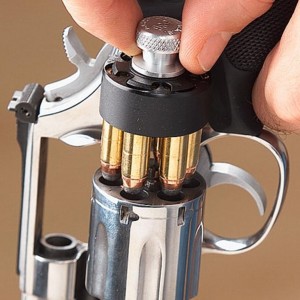 For many shooters, the twist-knob HKS speedloader is the only loader they’ve ever known. It’s the most common revolver speedloader on the planet, and simultaneously the least common speedloader used in competition. There are a couple of reasons for this, first the HKS requires you to stabilize the cylinder in some way because the release knob must be twisted to drop the cartridges in. Second, because it’s not spring loaded like the Comp-III or Jetloader, the cartridges have only gravity to get them in the revolver’s chambers. That means that if your cylinders are dirty, rounds can hang up. Of course, rounds can and do hang up with the Comp-III as well.

Back to Jerry for a moment – Jerry uses a switch-hand reload, where during the process of the load he transfers the gun from strong hand to weak hand, then back to strong hand. This load works really well with moonclip guns, because all six cases are tied together with the clip. With speedloader guns, you really need to give the ejector a positive strike to get all six out of there; so the speedloader gun version of the switch hand usually involves a little bit more gun manipulation. However, watching Jerry’s reload got me thinking about the HKS for one reason – the barrel of the loader (that’s the black part, the body) is relatively short, but not too short. It occurs to me that you could do a speedloader reload with the HKS much like a moonclip reload, but with the added movement of twisting the release knob.

I messed around with this for just a few minutes in dry fire last night, using my usual weak hand reload technique but pushing my index finger through the frame SnubTraining style to stabilize the cylinder. It…actually worked pretty well, because the chamfered charge holes on the gun would help guide the rounds into place, then twist-click and everything’s in place.

I’m not saying throw your Comp-III speedloaders away, but this definitely bears some further investigation in dry fire over the cold winter.