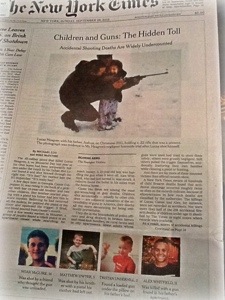 It should come as no surprise that the New York Times is putting out slanted articles filled with fear inspiring statements that demonize guns. However, this weekend the Times devoted more than half of it’s cover page to making children, who were accidentally shot and killed, into little martyrs for the pro gun-control argument. The New York Times will call these deaths “accidents” because the person who caused the gun to fire was not aware that pulling the trigger would have such a consequence, but I am less willing to divert that blame.

As part of a series called, “Bearing Arms: Examining the gun industry’s influence and the availability of firearms in America”, the New York Times’ Michael Luo and Mike McIntire, produced a cover story called, “Children and Guns: The Hidden Toll” which ran on September 29th. While clear with its over all intent, I did find that the article contained a few fair statements, though due to its length I doubt any sway-able readers actually got there.

I received the above image in an email from my mother on Sunday. I knew the gun owning community’s automatic response would be, “Welp, that’s the NYTimes for you!” But I also knew how my mother would read this headline while sitting in her apartment in New York City. I felt compelled to comment on this article due to the cross communication that continues to be missing from the gun debate.

From the beginning of their article, Lou and McIntire cite story after story of children miss-handling firearms that lead to death. In almost every case, the child was unsupervised, uneducated or too young to be trusted to handle a firearm. Yet the authors continually use the word “accident” as if the abilities of a gun are unclear to the responsible parties of each story.

The article complains that there is an under reporting of children killed by guns “accidentally” because they are usually ruled “homicide” not “accidental” deaths.

The undercount stems from the peculiarities by which medical examiners and coroners make their “manner of death” rulings. These pronouncements, along with other information entered on death certificates, are the basis for the nation’s mortality statistics, which are assembled by the National Center for Health Statistics, a division of the Centers for Disease Control and Prevention. Choosing among five options — homicide, accidental, suicide, natural or undetermined — most medical examiners and coroners simply call any death in which one person shoots another a homicide.

“A homicide just means they died at the hands of another,” said Dr. Randy L. Hanzlick, the chief medical examiner for Fulton County, Ga. “It doesn’t really connote there’s an intent to kill.”

These rulings can be wildly inconsistent.

The article goes on to say that the “accidental” shooting of a child can be ruled a “homicide” or “accidental” but if a child shoots themselves, the coroner may sometimes rule it a “homicide”, a “suicide”, or “accidental”. I feel for the NYTimes. If only someone would invent a data collecting system that would gather information in an ideal format so that we could easily use it to site statistics that bolstered whatever slanted argument we felt like writing that day. However, since they are clearly stating that the numbers they are about to give us are virtually fiction, let’s keep reading!

The real problem the writer’s of this article are having is a lack of gun safety knowledge. If they had researched both sides of the discussion, they would understand that we responsible gun owners take responsibility for events that transpire due to a mechanical device functioning properly. If a trigger is pulled, a hammer will fall and if every person with access to a gun understood and respected that, there would be no “accidents”.
However, these are New York Times writers and so before they concede to their lack of an argument, they will make yet another attempt to blame the gun, and even the child who pulled the trigger,

A common theme in the cases examined by The Times, in fact, was the almost magnetic attraction of firearms among boys. In all but a handful of instances, the shooter was male. Boys also accounted for more than 80 percent of the victims.

Time and again, boys could not resist handling a gun, disregarding repeated warnings by adults and, sometimes, their own sense that they were doing something wrong.

However, they can not escape the fact that our courts uphold the concept of adults taking responsibility when children are left in their care.

Not until their own quotes catch up with their misplaced blame, to the writers begin to sing a different tune.

Dr. Kohler said that because of the neglect issue, her office would almost never classify a firearm-related death as accidental, but added, “Different jurisdictions are going to handle things differently.”

When the issue of “safe-storage” is brought up, it is inevitable that the New York Times would focus on creating legislation, compelling gun owners to take responsibility for children’s safety. Yet, I fail to see how simply passing a piece of legislation will turn negligent adults into better parents. The article even goes so far as to bring up a home in which, even while criminally possessing a gun, a child was “accidentally” shot and killed. The adult was charged with the crime as well as with negligence, and yet the authors complain, laws need to be created so that adults can be held responsible. When I read this, my eyes cross. Negligently endangering a child isa crime and in these stories where a child is shot, I believe the negligence should be prosecuted. I think it is here that the New York Times misses an opportunity to call for better parenting in America.

The article takes plenty of opportunities to question and skew the actions of gun-rights groups, but at one point they do offer a little truth and clarity.

Gun rights groups have certainly called on gun owners to safely store their firearms. The National Shooting Sports Foundation says that it has distributed 36 million free firearm safety kits and that manufacturers have shipped 60 million locks with guns sold since 1998. But the groups argue that requiring gun owners to lock up their weapons could make it harder to use them for self-protection.

Though, the writers might be attempting to show how gun-ownership itself is nothing more than a dangerous act, their point only depicts the tug-of-war with which, gun-owners must constantly contend.

But then they lose any credit I was previously willing to extend to them, when they say,

Other research has found that simply having a firearm in the household is correlated with an increased risk of accidental shooting death.

(I must ask, where is the responsibility of the reporter who sites a source as “Other research”? Where could these finding have come from? Who is sampling data from homes of gun owners? NO ONE, because doing so in a proper scientific manner would be unconstitutional. But just for argument sake, let’s assume there was an actually source behind this statement.) So you mean having a gun around increases the chances of a shooting? What about owning matches? Do they increase the chance of a fire? For as long as I can remember, parents (and Smokey the Bear) have been trying to keep matches from being used as toys, so what would be so wrong with a Public Service Announcement about gun handling?

Later in the piece, the writers take a new angle to their plea for regulation of guns when they say,

“Gun rights lobbyists have also helped keep firearms and ammunition beyond the reach of the Consumer Product Safety Commission, which has the power to regulate other products that are dangerous to children. … Proponents of regulation say guns pose too great a hazard to exclude them from scrutiny.”

Slapping on a warning label is one thing, but what level of baby-proofing are these “proponents” willing to go to? Let’s look at household products that are hazardous to children, for a second. What could we do without, in order to keep children safe? I guess we could get rid of non-essentials; Guns or pets who may become aggressive, chemicals that are highly toxic and flammable fabrics might be part of this category. Then we have the convenience items which, I guess, most could learn live without; Irons, running water, plastic bags and cars. Of corse, there are always going to be built-in dangers which, to find a house that was devoid of these, would be virtually impossible; For example, electrical outlets, second story windows, heavy things that fall from high shelves, neighbors and pedestrians. who have not been background checked and may come over to borrow a cup of sugar, or worse…

Meanwhile, a similar group of people express that teaching birth-control methods over teaching abstinence, is the best method for avoiding “accidental” pregnancies in teens. To this hypocracy, I must snicker. An accidental pregnancy and a gun discharging accidentally, are completely synonymous, (except for the fact that not everyone has a gun, but almost every young person has reproductive organs). The point is, kids are going to get into trouble, they can’t be watched 24/7, so give them a fighting chance by providing them which complete (yet age appropriate) information.

This article ended with quotes from parents who’s children had been lost to these “accidental” homicides, but who have not run and hid from guns completely. This was an interesting twist for which I feel the need to give the New York Times credit. About the father of a boy who mistakenly shot his 5 year old brother, the article say,

Mr. Dwyer had removed all the guns from the house, sending them to his father. But about a year ago, his son started asking if he could learn to shoot. Mr. Dwyer said he would think about it.

It was a question that Mr. Dwyer, who now works as a fitness director at a Y.M.C.A., knew would come. Relatives would often go shooting together during family gatherings. His son was fascinated by all things military. Guns were simply a part of life where they were from. “In my context, there’s a part of a young man’s growing-up experience that includes exposure to firearms,” Mr. Dwyer said. “That’s one of the responsibilities, like learning how to drive a car.”

Mr. Dwyer also saw an opportunity for forgiveness. “It’s kind of a tangible expression of the reality of ‘I do not hold this against you,’ ” he said.

As understandably painful as the loss of his son must be, Mr. Dwyer, is not seen blaming or burying his head in the sand, but dealing with the state of the world, which includes guns, and being a responsible parent to the son he still has.