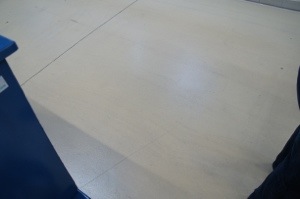 That image to you may look like a boring, clean piece of tile floor. In many ways, that’s exactly what it is. But it’s also a symbol, because in it being a piece of clean tile floor, it represents much more than that. Today I had the chance to tour the main Walther manufacturing facility in Ulm, Germany. This facility is where the current PPQ, PPX, and PPS pistols are manufactured, as well as Walther’s line of high quality Olympic level target rifles and pistols. To call the facility immaculate doesn’t being to do it justice. I have walked through a lot of factories and facilities, not all of them gun factories either, and I’d never been a shop environment this clean. See, that piece of clean, white tile isn’t in some rarely trafficked executive hallway, it’s on the production floor. I was standing next to a CNC machine when I took that shot, and all around me the ground looked the same. Clean.

To me, during the tour that cleanliness became a symbol for Walther’s attention to detail. That truly stood out for me on the tour, was the constant emphasis on quality control and attention to detail. For example; every single Walther handgun that leaves the factory is pressure tested with two rounds that are loaded to 30% above the C.I.P. (similar to SAAMI) maximum pressure? That means if you buy a Walther handgun, they tried to blow it up and failed just to make sure it was good enough to leave the building. Noodle on that for a second, because that level of quality control isn’t required to sell guns on the US market. Every gun that comes out of the Walther factory is test fired for a group, and if it’s for a police contract, they’ll test fire it with the ammo that police agency uses as their carry/duty ammo. The attention to detail and quality control is, for lack of a better word, maniacal. As a consumer, I appreciate that. I like knowing that my guns have been rigorously tested before they end up in my holster.

I saw some very impressive things walking the floor today at Walther. While there are only so many ways to build a gun, because at the end of the day cutting steel is cutting steel, what I was really impressed with was the sincere dedication on the part of the Walther employees to both putting out a quality product and taking pride of ownership in their own working environment. Employee workstations were neat, organized, and efficient – and watching them build a gun in that environment was a genuine treat for me. I’ve always been fascinated with the “business/industrial” side of the gun community, and seeing it come together with fastidious attention to detail was absolutely amazing.