I have found a new favorite place to shoot! About 45 minutes south and a bit east of Atlanta is a “Wild Life Managment Area” called, Charlie Elliot Wildlife Center. Now, I say that the trip takes 45 minutes, but if you live in, have ever visited, or have even heard of the city of Atlanta, you know that the bulk of the travel commitment is not included in this amount of time. So, as long as you’ve packed your patience, you will be in for a treat!

I visited the range, for the second time ever, this past weekend, and I was impressed that the guys running the place remembered me from my first visit. (They even asked why their range hadn’t yet received a write up on ArmedCandy!!) They are so sweet and helpful, even while being extra vigilant toward careless shooters or idiots. They have helped me set up product tests that are both safe and useful, even when they are not sure “if I should really be allowed to shoot that here”… 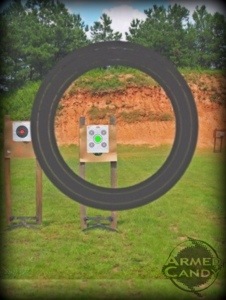 However, this weekend, while at the Charlie Elliot Shooting Range, my focus was primarily on sighting in my AR. I recently removed the cheap red/green dot optic that I had originally put on the rifle in exchange for inexpensive iron sights. My reason for doing this was that without a co-witness front sight the dot in the optic was useless. Only I, really knew where it needed to sit for a precise shot and it was NOT in the center. After using 50 rounds to zero the gun, a 25 yard shot aligned to look something like what is pictured to the left. So the optic was returned, and iron sights put in its place.

Prior to my range visit, I attached a laser to the muzzle of my rifle and did my best to align the sights at home. At this point I noticed that the front sight post had no where to go but up and the rear sight was turned pretty far to the left and it still looked like I was not aligned with the dot from the laser bore sight. I took the gun to the range and hoped that I was close enough to just do minimal tweaking, and then have some fun. 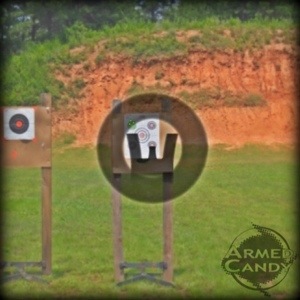 60 rounds of .223 later, I looked around and realized, I was out of ammo and my shots were still hitting like the green dots picture on the right. Further, the rear sight was now, all the way to the left, and the font sight post was still twisted all the way down. I was at a total loss… other than taking a file to my front sight post or buying a riser for the rear. Per the RSO’s suggestion, I had tried raising, rather than lowering my front sight. This had only caused rounds to dissapear into the berm without ever touching the target. My shooting buddy for the day was of the opinon that I needed magpul sights, because Magpul makes everything better.

I let my AR cool and played with my CZ 75, which has never let me down. 24 hours later, I’m still completely frustrated and disappointed. This is probably why I don’t compete; A day at the range that leaves unresolved issues, sends me on a downward spiral of self loathing that doesn’t get go away until I can get the situation fixed. (And Charlie Elliot isn’t open on Sundays or Mondays!)