In yesterday’s summary of some of the changes to the IDPA rulebook, I mentioned that I’d specifically wait until today to discuss the new rules for reloading. This seems to the source of much of the discussion and angst about the rule changes. There’s a great analysis of it over at Pistol-Training that you should read as well, because Todd looks at some points that I’m not going to touch on. 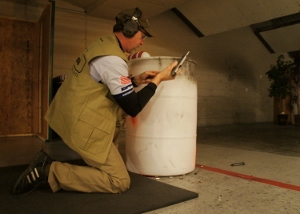 First, let’s take a look at the actual rules. The first rule we’ll look at is the reloading in the open rule, which when it goes into effect will allow you to initiate a reload in the open if your gun runs dry. Here’s the relevant text:

3.8. All reloads must be performed behind cover; however, a shooter, who runs the firearm empty while in the open, may initiate an Emergency Reload while advancing to the next position of cover. The shooter must
continue moving while performing the Emergency Reload and may not engage any remaining targets until
behind cover, if cover is available.

The generally agreed upon consensus on this rule is that it’s a good rule. I know there were times last season shooting a revolver where I’d shoot six “in the open” and then wouldn’t be allowed to initiate a reload until I made it to cover 5 yards away. There are some complaints about this rule in that it gives more athletic shooters an advantage, however the IDPA rules on max movement in a stage or string pretty much even that one out as far as I’m concerned.

That brings us to the hotly-debated flat footed reload rule. Again, here’s the text:

3.9.1. If the shooter runs the firearm empty behind cover, the shooter may not advance in the stage, (move toward the next shooting position) until the weapon is deemed loaded.

A bit further down, they define “loaded” as “magazine fully inserted and slide forward.” So let’s get inside this rule’s head a little bit. First, we’re not going to engage in any discussion of “tactics” as it relates to this rule, because the second you start talking about “tactics” and IDPA, the discussion cannot go in a productive direction from there. Anyway, the first question to ask is “what is this rule going to change?”

I went back through tape from a number of IDPA matches. Matches I reviewed included the 2011 IDPA World Championship, the 2011 Carolina Cup, the 2012 Indoor Nationals, several stages from the 2012 Carolina Cup, and the 2012 IDPA Nationals. In those matches, I found two instances where a reload on the move was allowed/possible and made sense within the design of the stage. Both of those were at the 2011 World Championship, interestingly enough. When I opened up my review to include state level matches, interestingly the number of places where a moving reload was possible was about 1 in every 6 matches. In those matches there were never more than 2 reloads on the move in the entire match. It was highly regional, and even on stages where a moving tac load was a better stage plan, most shooters didn’t take advantage of it, opting instead to dump extra rounds on one or more targets to go to slidelock at a shooting position.

It’s my opinion that we’re not really losing much with this rule. Further, I feel that what we are losing is offset by the gains in the rulebook, such as the elimination of round dumping, and the addition of allowable reloads in the open. Now, I am biased – I don’t shoot at a club or in the region where reloads on the move are common, and I never have. So perhaps my opinion is colored by the fact that I’m definitely not losing anything. At the end of the day, IDPA is a game. I think we can spend hours, days, weeks, and millions of pretty little pixels arguing about this rule, or we can just go do some shooting instead.