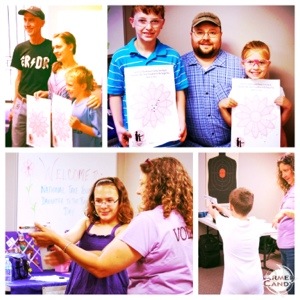 Yesterday was Father’s Day, in case you forgot… Did you get anything good?
A notoriously bad day for gift giving, Father’s Day seems to have become more about spending a little quality time, rather than showing appreciation for the other 364 days of the year. I believe this to be true because I spent Saturday in Cumming, GA with the women of A Girl & A Gun Women’s Shooting League. Saturday was the second annual “National Take Your Daughter to the Range Day” and the ladies were volunteering at Bulls Eye Marksman Gun Club, to run the day’s activities. It was the perfect event to honor paternity, because, while times may be changing, its still typical, for shooting to be a lesson that fathers teach and pass down through the generations.

“National Take Your Daughter to the Range Day” is a young not-for-profit organization that creates a packaged event for ranges around the country. The concept for the specially organized range day for young families, was inspired by an understanding that, often, sons are taught to shoot while daughters are not. On Friday night, I was a bit discouraged to see that only two ranges in the entire state of Georgia were participating in NTYDTTRD. (It was especially disappointing to note that my former workplace in Sandy Springs, GA, which is owned by two mothers, was not one of the gun ranges participating.) But on saturday afternoon my frown was turned upside down, by the steady flow of traffic at Bulls Eye. The volunteers, were also excited to see many more participants than they did last year.

Many fathers with daughters, and quiet a few complete families as well, were greeted by food, raffle drawings and door prizes, goodie bags and three different shooting activities, when they arrived at the range. Outside, water gun and BB gun challenges were offered. Inside, volunteer range safety officers, the members of AG&AG (and some of their men too), went over safe firearm handling rules. They then lead participants through activities involving a .22lr pistol in the indoor range. An equal number of male and female children (age seven and up) seemed to be out enjoying the festivities, and while there were plenty of experienced shooters, the glow of new shooters, showing off their little pink targets, was priceless.