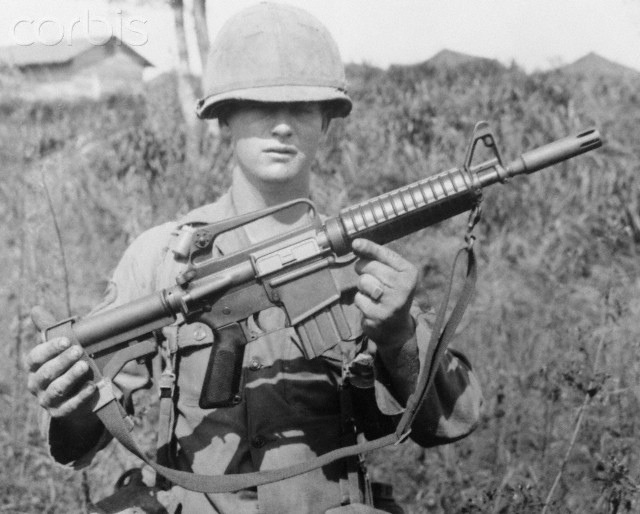 In order to do a better job on my own AR-15 build, I figured it might be handy to learn the history of this coveted weapon system. Having studied architecture in college, I realize that some times form can be affected by more than function. It turns out, the AR was not an immediately hit and caused almost as much controversy as it does today. But I get ahead of myself. We should begin with the term “AR”. Until recently I believed the acronym stood for “Assault Rifle”, but I learned that “AR” actually stand for the company at which the platform was invented, Armalite. Eugene Stoner, Armalite’s chief engineer in the early 1950s, called on his background in the aircraft industry, and designed a rifle that was lightweight and appropriately “space-age” for the day. He utilized plastic, fiberglass and aluminum for the AR’s design, which was an 180 degree turn from the steel and wood firearms previously on the market.

The AR-15 strived to become the go-to gun for the American military, but had to struggle through red tape and set backs before that could happen. In the meantime, it was sold as a sporting rifle to the American public. Though the light nature of the AR and the use of a small caliber were solutions to the military’s small-arms issues at that time, many were uncomfortable with such a new and different design, from an unknown manufacturer. The powers that be, even went as far as sabotaging tests of the AR, to keep the gun from becoming standard issue.

It wasn’t until the Vietnam war that US troops were sent into the jungles with the AR-15, now deemed the “M16”, for military purposes. At that point the design had been bought by Colt, and had been gone through a number of design iterations. The gun was the appropriate tool for the style of battle happening in Vietnam, but after the Secretary of Defense and the Army Ordinance had played tug-of-war with the AR’s value engineering, some major flaws popped up, at the worst possible time.

Stay tuned for the conclusion of “AR-15: A Brief History”