A new company has sprung from this tactical trend, and now Tactical Bedazzlement is offering a variety of products for the operator who wants to have the most elite assault gear. 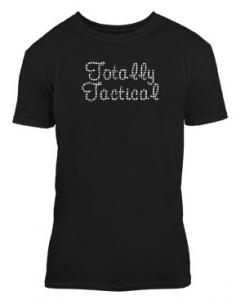 The line includes the Tactical Assault T-Shirt, bedazzled with the latest in warfighter styles for the ultimate in tactical blinding techniques. These shirts are set up with the most advance bedazzlement pattern, after years of military testing it has been proven that the pattern displayed here is the most tactically effective for bedazzling combat situations. The t-shirt is fitted to specifically accentuate the wearer’s assets in a manner to draw attention away from whatever action they are taking in order to keep possible threats equally distracted in lighted situations.

Also available is the Ultra Operator Holster. This holster is designed with several different bedazzlement color options in order to accommodate the different environments a warfighter may be entering. Color options include “Flashy Dark Earth,” “Glitz Black,” and “Olive Fab.”

This new process is being continually adapted for different products, and is currently under testing by the Navy Seals, Special Forces, and Her Majesty’s Secret Service.