The day after I published our piece on the ammo shortage, Gear Scout published a similar piece titled Homeland Security’s Ammunition Purchases Should Not Worry You. Unsurprisingly, it attracted the same sort of comments that the post here on Gun Nuts attracted…in some cases, it attracted the exact same comments. Now, obviously the reason Gear Scout published a piece right on the heels of our piece on the ammo shortage is because we’re just shills for the corporate gun business, which is in bed with the Obama administration to deny ammo to law abiding citizens, right? 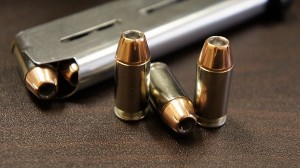 I’m certain that there are some people who actually believe that, but the truth is a lot simpler – it’s a compelling story that affects the firearms industry and there’s a ton of misinformation out there right now being shared on Facebook on other social media sites. I’ve seen all kinds of crazy nonsense from people about the ammo shortage.

The facts are actually out there – we have them here on Gun Nuts, and they’re on Gear Scout too. The bottom line is that DHS’ ammo purchase isn’t actually a big deal. Sorry, conspiracy theorists, but President Obama isn’t in league with ATK to keep you from shooting .22 LR off your back porch.