In past entries in the gunblogger series, which will all eventually be restored to the archives, I’ve talked about the value of critics, and also how to not let your inevitable haters get you down. But what I’ve not talked about is the other side of the hater coin – you. Specifically, what to do when there’s someone in the industry or online that you just don’t like. 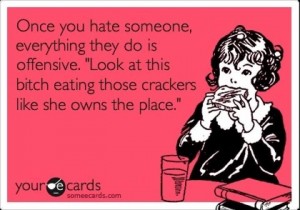 If you work in any industry or within any small community long enough, you’ll eventually end up not liking people. It’ll become all too easy to lose objectivity when you deal with those people or work they’ve done, and without attempting it, you’ll have become the thing you wanted to avoid: a hater. So how do we deal with that?

The advice here is personal, and I give it because it’s what works for me. It doesn’t work all the time mind you, and I have my moments where I slip, but for the most part it does work pretty well. The first thing that’s really important though is to acknowledge that you don’t like that person. If you’re like me, you generally want to be the good guy, and it doesn’t fit with the “good guy” to be holding grudges or not liking a person. Despite that, we’re all human, and if you try to convince yourself that you don’t dislike someone when you really, really do, you’re just going to go crazy trying to convince yourself of something that isn’t true.

The second step in managing your own negative feelings is to really figure out why you don’t like the person in question. Are they just a toolbox, or did they actually do something specific to wrong you? It’s perfectly fine to not like a person for being a tool, but it’s not healthy to obsess about how much you dislike that particular person. It’s also not healthy to obsess about someone who has actually done you wrong, but you do get a bit of a pass if you occasionally think “f*** that guy” regarding someone that has actually done a bad thing.

Most people won’t make it past the second step. It’s the hardest, because it involves being honest about your feelings. I know that there are people I’ve disliked for really stupid reasons, and realizing that I was being stupid and petty was the hardest part of that. Even harder is managing the emotions around people you don’t like but have fairly legitimate reasons to dislike.

It turns out that the best way to manage childish feelings is to be a grownup about it. Who knew? The truth is that you’ll always have people in any small community that you’d rather not work with, or that you plain old just don’t like. As a blogger, you’re a member of an even smaller community, and if you’re a good blogger, you’re going to upset some people simply because you take strong positions. You’ll get upset as well, and the best way to deal with all of it is just what your father (if he was good) told you: be the bigger man. Don’t feed the trolls, don’t troll the people you don’t like, and rise above it.