Bianchi Cup is really all about accuracy under time pressure. While on some stages the par times are quite long, on other stages like the Barricade they can be tight enough to force you to make poor decisions with your sights and trigger. 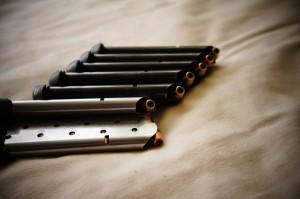 Chatting with top pros about how to train for the Cup, every single one of them has said “go shoot groups.” You don’t necessarily have to practice the Cup’s courses of fire on a one for one basis, because the fundamental skill we’re looking to build is accuracy. After some tweaking, I’ve come up with the group shooting course that I’ll be using to train for the Cup.

When possible, I want to shoot my groups at 25 yards or greater, because accurate off-hand groups at 25 yards are a skill that evades many good shooters. At Bianchi Cup, strings of fire are never less than 2 shots and never more than 6, so for group shooting training I’ve come up with the following plan.

That’s pretty much it. The idea behind it is to shoot good groups in intervals of more than one shot. In between strings you can table the gun, take a deep breath, do whatever you want, but fire each string as a continuous number of shots. 2, 4, 6. That will get you in the rhythm used by most of the stages at the Cup, as well as challenge you to maintain visual focus for an extended string of fire.

For added difficult, include a par time. I usually just add 1 second to the number of shots I’m going to fire to create a par for these stages. 3 seconds for 2 shots, 5 seconds for 4, 7 seconds for 6 shots. However, I don’t add par times until I can consistently shoot 6 for 6 at 25 yards in the 4 inch circle. If you’re having trouble getting all your hits, increase the target size to 8 inches, but still drive for the 4 inch x-ring as your goal.

Of course, you actually have to get out and practice!