Have you ever been on a gun forum? If so, first off I’d like to apologize for any mental trauma you may have experienced at the hands of forum dwellers; but secondly and to the point of this post, I’d like to know if you’ve heard this phrase or some variant of it: 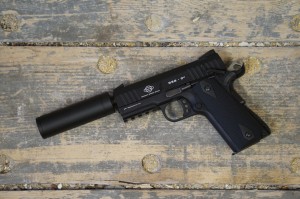 The .22 LR kills more people every year than any other round in the country.

To my eternal shame, I’ve probably said that at least once myself, because I read it somewhere and it sounded good. It’s taken on a life of its own these days, and is guaranteed to pop up in any forum discussion on “stopping power”. The question is, where did it come from?

The first time I can recall seeing it was on a forum where it was quoted as a part of an appeal to authority argument – “the FBI reports that more people are killed with .22s than any other round.” Of course, that FBI doesn’t actually exist anywhere that I’ve ever been able to find, which puts us back at square one on this incredibly long lived gunternet meme.

The closest thing I’ve been able to find with some considerable googling is a LEOKA report from 2000 which lists the .22 LR as the caliber used in 4 fatal shootings of LEOs. The table is here, and it doesn’t actually support the theory that .22 kills more people than any other round. 9mm was used in 8 fatal shootings in the report, and .22 LR is tied with .38 Special and .45 caliber handguns with 4 each.

So if the quote doesn’t come from the FBI, where does it come from? Unfortunately, google isn’t much help, because all the permutations of “22 lr deadliest caliber myth” I can come up with don’t really lead to any actual helpful information. In fact, after spending the morning researching this myth, I can’t but help come to the conclusion that it’s just one of those gunternet myths that’s never going to die. It’s been repeated so frequently in so many places that it’s just accepted by people without really thinking about it. Of course, here at Gun Nuts, we want to encourage people to think. When someone says “DA/SA is harder to shoot” ask why. When someone says anything about “blah blah round has more knockdown power” ask them to cite a source. Don’t let online BS go unchallenged. If the .22 LR really does kill more people in America than any other round, find a study that can be reasonably extrapolated to nationwide data. Don’t just accept statements because you’ve heard them repeated a lot online – that’s how we ended up in this mess to begin with.