Feels a lot like 2008, doesn’t it? You can’t find ammo, mags, or AR15/AK pattern rifles anywhere. This actually feels worse than the 2008 panic, because in 2008 after President Obama was inaugurated, things mostly calmed down and production lines finally started to catch up to demand. 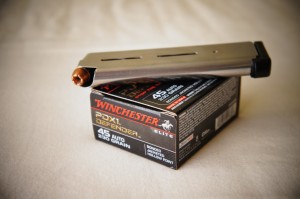 This particular panic started with the election, which to be fair we should have seen coming. It’s obvious in hindsight that Gov. Romney didn’t stand a snowball’s chance in hell, but because I really wanted him to win, I blinded myself to the obvious signs. I wasn’t alone, so when President Obama won re-election, there was a bit of shock buying that happened right away.

Of course, just as all that shock was fading, the horrible murders in Newtown, CT occurred. Not wanting to let a tragedy go to waste, the anti-gun movement was re-energized by the murders and once again we found ourselves fighting a battle for gun rights on a national scale, which prompted another huge panic buy on the part of gun owners. “The sky is falling, get your PMags now” became the rather sad rally cry as gun owners across the nation wiped dealers and distributors out of basically anything that might be covered under a new AWB.

That pretty much brings us to where we are now, still feeding the panic. I’ve seen it on the sales end while idly observing our inventory at the GunUp Shop. If we get something in that could possibly covered by the ban, all I have to do is blink at it’s gone. Post a link on FB and 20 minutes later, sold. That “holy sh*t they have ARs we must buy” attitude only feeds more panic buying. Same happens with ammo, where people who normally buy a couple of hundred rounds here and there suddenly bought thousands of rounds at once. The available supply of X (BCGs, stripped lowers, ammo, mags) goes down while the demand stays strong, so prices go up.

Where does that leave us for the remainder of the year? Well, the good news is that eventually the scarcity of ammo/mags/rifles/etc is going to come to an end. Just like 2008, there’s going to be a huge spike in the secondary market in about 2-3 months, probably mid Q2 as people who’ve been hoarding ammo and bought four rifles need to make a mortgage payment and realize they have all this gun stuff sitting around that they can likely convert into money. The 6 month backlog that many manufacturers have will slowly get cleared up as backorders get filled and cancelled. Ammo companies are running ’round the clock churning out the major calibers – .308, .223, 9mm, .45 ACP, .22 LR so eventually we’ll get caught up there as well.

But this takes time; and it doesn’t go any faster unless we all can take a collective breath and go “whoa, okay.” All of the energy that’s being spent to buy and hoard ammo and rifles would right now be better spent calling and faxing your representatives. That’s going to be the difference maker, because I don’t think people are really going to calm down until someone puts a stake in the heart of Senator Feinstein’s anti-gun bill in the Senate. So instead of hoarding 5.56 ammo, call your representatives. Send them a fax. Use Ruger’s Write your Reps tool to contact them. Don’t get trapped into thinking that buying a rifle is political advocacy. If you’ve bought a rifle, it’s time to get on the horn and start making some political waves.