I was reading the other day about the color coordinated conditions of readiness that Jeff Cooper came up with all those years ago. In the article was a suggestion that the only time it’s acceptable to be in condition white is “in your own home, with the doors locked, alarm on, and dog at your feet.” 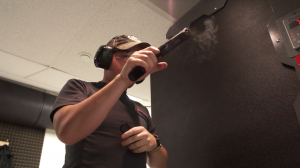 I’m sitting in my office right now, typing this post at my desk and I can tell you I’m definitely not in condition yellow; but I’m also not fully in condition white either. One of the things that I’ve come to realize is that while the white/yellow/orange/red/and sometimes black color chart is useful, they’re more like guidelines anyway.

For the uninitiated into what I’m talking about, the firearms/self defense community by and large uses the following color code list to describe various states of alertness. From wikipedia:

White: Unaware and unprepared. If attacked in Condition White, the only thing that may save you is the inadequacy or ineptitude of your attacker. When confronted by something nasty, your reaction will probably be “Oh my God! This can’t be happening to me.”

Yellow: Relaxed alert. No specific threat situation. Your mindset is that “today could be the day I may have to defend myself”. You are simply aware that the world is a potentially unfriendly place and that you are prepared to defend yourself, if necessary. You use your eyes and ears, and realize that “I may have to shoot today”. You don’t have to be armed in this state, but if you are armed you should be in Condition Yellow. You should always be in Yellow whenever you are in unfamiliar surroundings or among people you don’t know. You can remain in Yellow for long periods, as long as you are able to “Watch your six.” (In aviation 12 o’clock refers to the direction in front of the aircraft’s nose. Six o’clock is the blind spot behind the pilot.) In Yellow, you are “taking in” surrounding information in a relaxed but alert manner, like a continuous 360 degree radar sweep. As Cooper put it, “I might have to shoot.”

Orange: Specific alert. Something is not quite right and has your attention. Your radar has picked up a specific alert. You shift your primary focus to determine if there is a threat (but you do not drop your six). Your mindset shifts to “I may have to shoot that person today”, focusing on the specific target which has caused the escalation in alert status. In Condition Orange, you set a mental trigger: “If that person does “X”, I will need to stop them”. Your pistol usually remains holstered in this state. Staying in Orange can be a bit of a mental strain, but you can stay in it for as long as you need to. If the threat proves to be nothing, you shift back to Condition Yellow.

Red: Condition Red is fight. Your mental trigger (established back in Condition Orange) has been tripped. “If ‘X’ happens I will shoot that person”.

Using these gives instructors a simple method to teach their students about basic states of alertness. To make it obvious, I’ll remove the self defense language and apply them situations that basically everyone will face today. For example, when I was laying in my rack this morning trying to decide whether or not to hit the snooze button, I was in all kinds of Condition White. When I hop in the car later to go to the bank, I’ll be in Condition Yellow the whole way. In the car that means head up, eyes scanning the road, alert for other drivers who are not alert. If I see another driver that appears to be about to run a stop sign or do something dangerous, I’ll shift into Condition Orange, and have a plan to deal with them. If they do whatever it was I was worried about, I’ll go to Condition Red and execute my plan.

It all seems nice and linear, right? The problem is that it’s really not; and we’ll stick to traffic as an explanation. I can be doing a perfect job of driving in Condition Yellow – I’m alert and aware of my surroundings, and that doesn’t do me a hell of a lot of good when the semi two cars in front of me clips the mini van while changing lanes and the minivan spins into my car at 70 mph. All of that happens in under a second. You can be doing a perfectly good job of being aware in Condition Yellow and still get ambushed by a criminal, for no other reason than the criminal does this for a living and is better at his job than you are at being aware. There are also plenty of times where you have to go immediately from Condition Yellow to Condition Red and do some expedient emergency problem solving.

The color codes are awesome, and they’re an excellent way to instruct people on the basic concept of situational awareness. However, like a lot of things if they’re turned into dogma they lose the majority of their value. I believe that the real point of the color codes (and the 4 Rules, but that’s another post) isn’t to create a set of rules to follow like dogma, but rather to get you to THINK about what you’re doing. Are you driving around in Condition White? Lots of people do. They cause lots of traffic collisions. What about when you’re in a bar, having a few cold ones with your buddies? It’s pretty hard for me to sustain Condition Yellow on Whiskey Night at Lucky’s. What are you triggers to go to Condition Orange? Because there are good reasons to go to Orange and then there’s being paranoid. I once had a guy tell me that he went into Orange “every time he sees someone with a tattoo”, which I thought was stupid. If he had said “I go to Orange if I see someone with obvious gang tats, or the SS lighting bolts tattooed on his neck” I’d feel that was reasonable.

The last part of the color code is the one that requires the most thought, and it’s thought that must be done in advance. What are your fight triggers? Most of us that carry a gun agree that we’ll fight to defend our lives and the lives of our families, which is great. But before you even get to that point, you have to figure out when it’s okay to even go for your gun/use force. Wait too long and you may not get a second chance at anything, ever. Go too soon and you may end up in jail for a very long time. There are plenty of considerations that go into “when should I draw”; and they’re not just tactical. Some are strategic. For example, Shelley with her status as “tiny white girl” can quite likely employ deadly force earlier than my buddy PDB, who’s status a Giant White Man means that people perceive him as being more capable of dealing with a threat without shooting it. Regardless of whether or not that’s fair, it’s fairly true.