For the first time in recent memory, I’ve now carried the same gun every day for over a month. My Colt 1911 CCG has been my constant companion, usually carried in a Praetor Defense OWB holster while I wait for my appendix rig to be built. 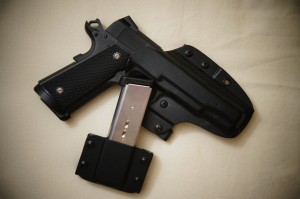 What’s really interesting about carrying the same gun for over a month is I start noticing little things that I don’t normally notice during a regular T&E cycle. Usually, if I get a gun/holster combo for a magazine article, I’ll carry it for about a week or so, shoot it, etc and then go back to whatever my main gun was before that. With the 1911 though, a month plus of carrying it has given me insight that I don’t usually get.

The first thing I’ve noticed is that it honestly is easier to conceal a full size 1911 than it was to conceal my Sig P229. This isn’t so much a knock on the P229 as it is a realization that the slimness of the 1911 really does make it easier to carry. In the one appendix holster I do have for the gun, the full size grip conceals with much less work than the double stack grip of the Sig.

The second thing I keep noticing is the sound. The gun makes noise when you carry it, something I’ve become incredibly self-conscious about. For whatever reason, I imagine that everyone for 100 meters can hear the slight jingle of every step I take, even if I know that’s not actually the case. The slight rattle/jingle of the gun is unnerving when you’re carrying concealed, but it’s also not nearly as loud as my brain thinks it is.

Lastly, I find myself carrying a spare magazine all the time. With other, higher capacity 9mm pistols like my Sig, I usually wouldn’t carry a spare mag, because I felt that 15+1 would probably be enough ammo to get me out of a jam. With the Colt, I want more than 8+1. Since I know that “stopping power” is all just a bunch of marketing nonsense, I’d like to have more bullets. As such, I carry a reload when I carry a 1911. It’s a little weird, because I know that if 15+1 is “probably” enough, than 8+1 is also “probably” enough.

So, who out there has recently switched carry guns? Did anything change about the way you approach CCW?