Following up on the success of their G9 Carbine, a 9mm AR style carbine that takes Glock magazines, Lone Wolf plans to introduce a .45 ACP model later this year. We had a single prototype available at SHOT Show, and the response from consumers was pretty impressive. 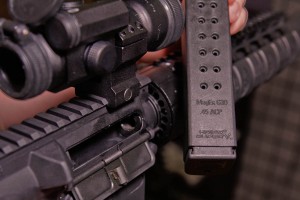 While the pistol caliber carbine may have been eclipsed in LE use by the 5.56 platform, for civilian shooters it still makes a lot of sense, especially if you’re a Glock shooter. The ability to change mags and share ammo between a rifle and a pistol is certainly a nice feature, and it’s also easier to make tough shots with a rifle than it is with a pistol. Yes, your terminal ballistics with a .45 ACP aren’t going to be as good as they’d be with a 5.56, but I’d much rather take a 50 + yard shot with a rifle just for the advantage of a longer sight radius or an optic even if I’m using a pistol cartridge. 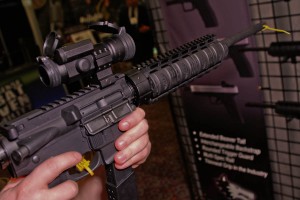 Now, I realize that .45 ACP has some limitations out of a carbine, but because I run a Glock 21 I’m definitely interested in one of these. However, there’s another prototype carbine (not pictured) that we had on the show floor at the Lone Wolf that is going to make a good friend of mine reconsider his debt free lifestyle. You see, Lone Wolf will also be offering a carbine in…10mm. Now, normally I’m not a big fan of the 10mm, but from a carbine I think it’s an awesome idea. Especially if you cut the barrel down a bit and put a can on it, you can play Battlefield 3: Modern Hog Warrior and go down to Texas and slaughter feral hogs with a suppressed 10mm carbine and night vision. Because who wouldn’t want to do that?

Look for the new Lone Wolf carbines later this year, the .45, 10mm, and .40 S&W models will share the same ability to take standard AR accessories as the G9 model. I plan on taking a .45 and outfitting it with some MOE gear and if I can, pinning a can to the barrel to make an awesome .45 ACP suppressed SBR.