It’s important to have a plan before starting an assault rifle build. There are so many parts out there that it’s easy to get caught up in needing everything and end up buying a bunch of stuff you don’t need. A large majority of assault rifle owners have a pile of parts they don’t use. Some to the extent that they could scrape an entire rifle out of the parts laying around. 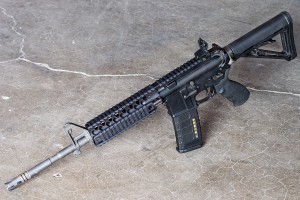 To avoid this fate, that to me generates an image of a crazy cat lady standing a pile of rifle parts rather than a pile of cats, assault rifle owners need to have a plan for their rifle. Whether the gun is being developed as a home defense gun and will need a suppressor, it’s being built for 3-gun, or the gun is being built for distance shooting and will eventually end up with a bi-pod acknowledging the rifles eventual use can help you decide what the gun may need or not.

With this plan in mind it becomes easier, when faced with a fun new toy to put on your rifle, to ask “Does this help me achieve my end?” If the answer is “I only want to put the iPhone mount on my rifle so I can play Plants vs. Zombies, not because I calculate smart distance things.” then you can save yourself some time and money and just buy a Magpul iPhone case instead.

Having said all that, if your plan is to buy a bunch of cool stuff to put on your rifle and see how many Magpul logos you can fit on one set of rails then please don’t let me stop you. One other note, on the name of the gun itself. An entire generation of new shooters has grown up calling these guns “assault rifles.” Instead of being pedantic about terminology, let’s try and welcome them into the fold.