The Mustang is a throwback to the original 1911-style pocket gun that was made popular by Colt in the late 1980′s, the little pistol was produced until 1997 and has now made a come back. Similar to the now-popular Sig Sauer P238, the Mustang has a single action trigger, a manual safety and a 1911-style look and feel. One of the guns I was eager to shoot at Media Day, the little Mustang is easy to handle and a fun little pocket gun. 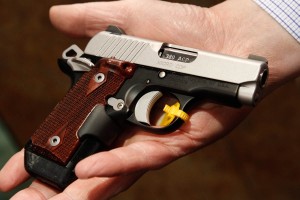 The Kimber Pro CDP II was my very first handgun, but the lightweight .45 is relatively large and quite a handful. The new Micro CDP is the scaled down version of the popular CDP model, complete with single action trigger, manual safety and available with rosewood or Crimson Trace grips this little gun is sure to be popular among Kimber owners. The Kimber Micro CDP is designed after the CDP platform, and is not comparable to the Kimber Solo.

The Sig Sauer P250 now has a .380 configuration available. The unique modular pistol has been designed to exchange frame sizes and calibers using a serialized trigger kit so that multiple firearm purchases don’t have to be made to fulfill a shooter’s needs. In .380, the P250 is a double stack, making it wider that its competitors, but has a 14+1 round capacity, significantly higher than other .380s. Since the Sig Sauer P250 is still recoil operated, a lightening cut had to be made so that there was still enough recoil to run the gun with the low-pressure .380 rounds.