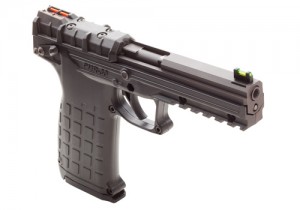 Speaking of Kel-Tec, they have currently suspended production of the Kel-Tec PMR-30 (of which they weren’t really producing a lot of guns anyway) due to keyholing issues with the gun.  For those not familiar with the term, keyholing is what happens with the rate of twist in the barrel doesn’t stabilize the bullet in flight.  The result is that the projectile tumbles and loses both accuracy and velocity at a much more rapid rate than a properly stabilized bullet.  Kel-Tec’s official press release follows the jump.

As time has progressed, so has the PMR-30. Since the start of the year the PMR-30 has been shipping in full quantities to all of our distributors on a rotating basis (to make it fair for all distributors). Recently we have been made aware of a potential issue that we feel our customers should definitely be made aware of. We are in the middle of a re-design to our barrel due to key-holing concerns. For those unfamiliar with key-holing, basically it is when the bullet tumbles end over end rather than travelling stable with a solid spiral. It seems as though the 1:16 twist ratio of our barrels isn’t quite preventing these issues from occurring. We are currently testing new twist ratios for the PMR-30 so that these issues no longer occur (1:9 and 1:12). There has also been a cosmetic change to the barrel: we have removed the fluting on the barrel. The initial fluted design was for weight reduction, however it was time-consuming to produce. We have created a new design that matches the weight and decreases production time significantly. It will look like a more traditional pistol. IMPORTANT: For customers who DO own a PMR-30 and are experiencing key-holing, you may send your barrel in to be replaced by the newly redesigned versions once they are available. When they are available, a status update will be made so that our customers know that they can go ahead and send their barrel in for replacement. Shipping costs will be reimbursed, of course. Once the new design is tested and implemented, we will post all necessary information for sending back your defective barrel for replacement. As of today: 5/10/2011, we are halting shipments on the PMR-30 to reduce the number of potential key-holing pistols that go out. We estimate a 2-week period until shipments are resumed. We sincerely apologize to everyone who is affected by this. We hope that our customers understand that we are trying hard to make sure that the best possible product goes out.

I’m glad that Kel-Tec is going to try and make this right, because honestly the PMR-30 is the only Kel-Tec product I’ve ever really been interested in buying. I have a deep love affair with .22 Magnum, and I think it’s just a neato little cartridge in an autoloader. That being said, the PMR-30 has been plagued with reliability issues since it was introduced, and now with the added problem of tumbling bullets it has been effectively removed from my list of guns I’d want to buy.