Took a trip yesterday to the Sci-Fi Museum here in Seattle to celebrate the end of the election cycle.  One of the neat things they have at the Sci-Fi Museum is a little wall called the Armory, which features weapons used in all manner of science fiction films and TV throughout the years.  They also added a temporary Battlestar Galactica exhibit, based on the re-booted series that aired for 4 years on the Sci-Fi Channel.  I do have to apologize for the crappy-to-average image quality.  The iPhone camera wasn’t always up to the task.

First up we have probably one of the finest examples of prop weapons from films, The Morita Rifle used in Starship Troopers. 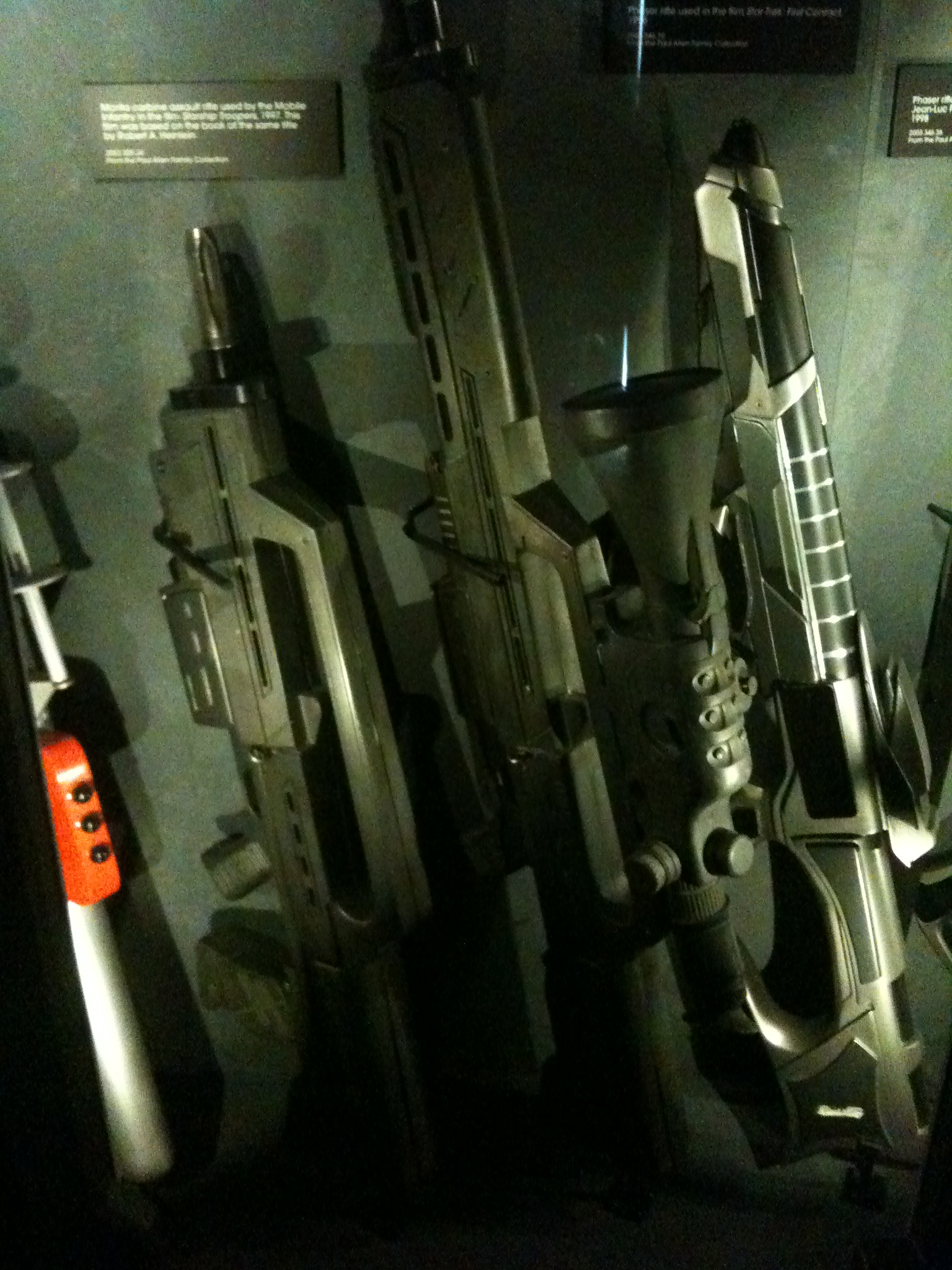 The Morita represents a neat combo gun – unlike a lot of “prop” guns that you’ll see here that do nothing, the Morita was built from a Ruger Mini-14 action and an Ithica shotgun.  In fact, several Moritas were built on Ruger AC556 rifles, which was the select fire variant of the Mini-14 seen most commonly in the A-Team.  In the picture you see the common Morita rifle that was “standard issue” to the Mobile Infantry in Starship Troopers, as well as the only sniper variant rifle seen in the film (which would later be recreated in the low-budget sequels to Starship Troopers).  Personally, I like it when prop guns are built on real, functional firearms.  Another great example of this is the pistol used by Nathan Fillion in Firefly and Serenity.  The external housing was mocked up to resemble a Remington revolver, however inside that housing is a fully functional Taurus M85 revolver.  Pretty cool stuff, but one wonders why they didn’t put a Smith & Wesson in there. 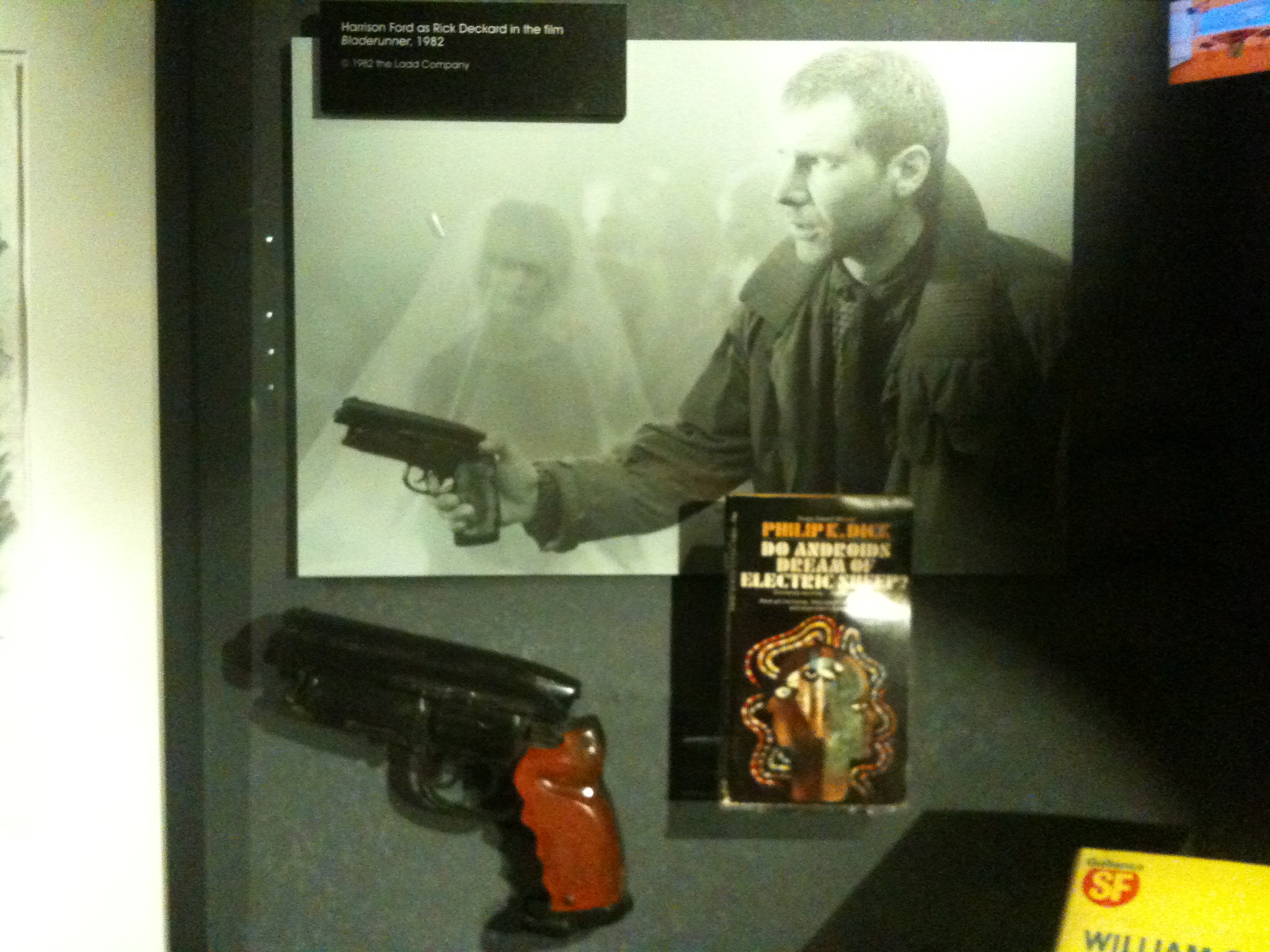 One of the most memorable guns in sci-fi though is Rick Deckard’s gun from Blade Runner.  This gun has been rebuilt in both functioning and non-functioning form by enthusiasts across the country, and even made a cameo appearance in the first two Fallout games (the only good Fallout games) as the .223 pistol, which in the first game was a ridiculously overpowered death-dealer.  Seriously, put a bunch of points in to small guns and it’s critical hits to the eye all day long.  Hilarious.

Of course, no list of sci-fi guns would be complete without the pistol seen repeatedly in Battlestar Galactica, which honestly looks like it should be in science fiction anyway. 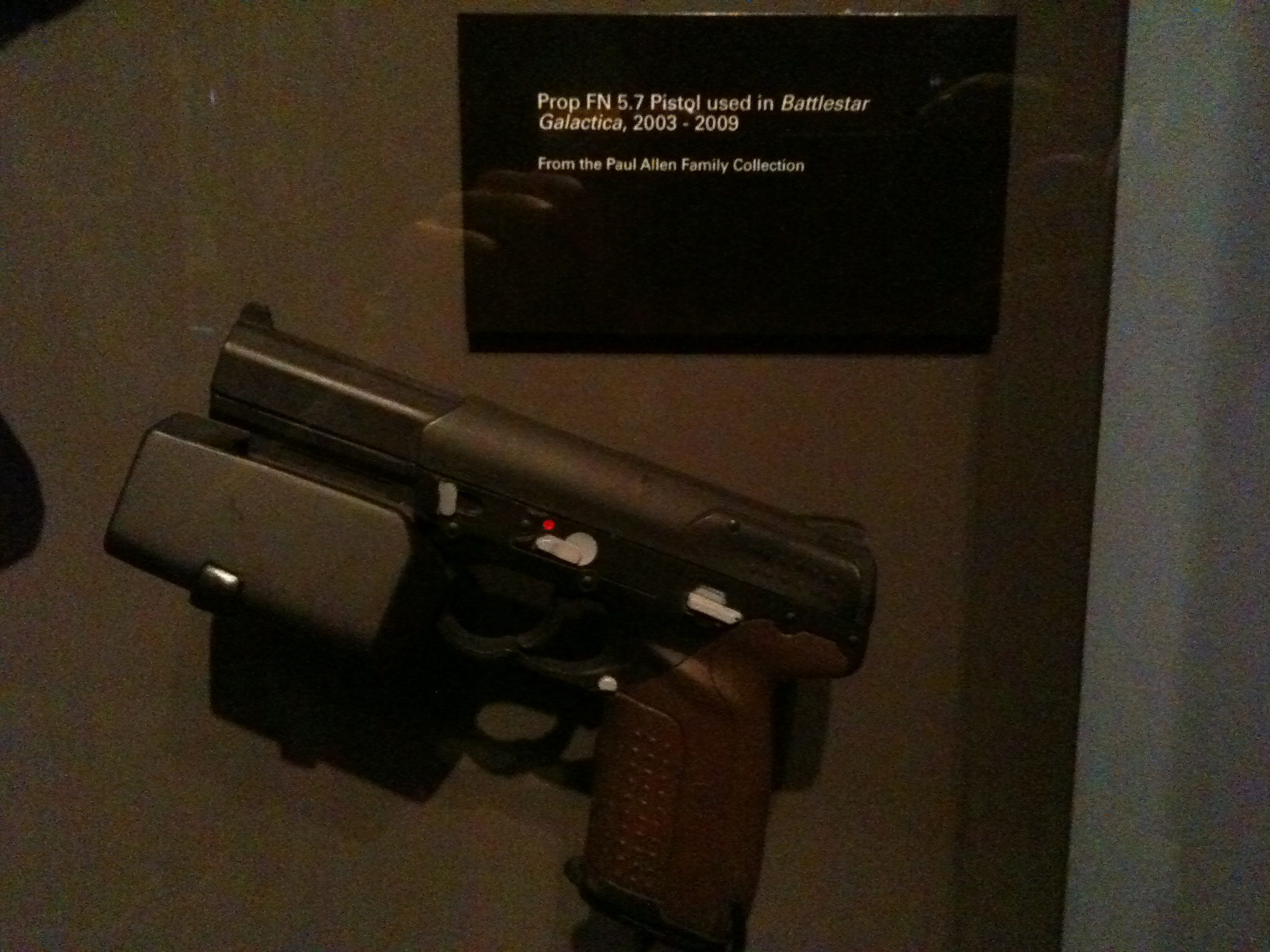 The standard issue sidearm of the Colonial military in the film is the FN Five-seveN, usually outfitted with a cosmetic “grenade launcher” under the barrel.  What’s interesting is that in the mini-series that launched the show, they didn’t have the Five-seveN and instead had to used gussied up reproduction LeMat revolvers.  Sadly, the museum did not have one of those on display.  Note that the prop Five-seveN gun has the large trigger guard, which was put on the FN pistol to make sure that users in cold weather could get a gloved finger in there to manipulate the trigger.  I’m not going to lie, long term readers will know that I’ve had a thing for the 5.7×28 round and pistol combo for a long time, despite the fact that I can’t use it for competition and the ballistics indicate it’s not exactly a death ray out of a pistol.  I don’t care, I still wish IDPA would add a “sub-caliber/PDW pistol” division or something so I could justify buying one.

Weapons play a huge role in sci-fi.  Despite many authors trying to create utopian worlds in their science fiction universes, it always seems that the coolest sci-fi books and movies are the ones with cool guns and cool spaceships.  Whether it’s Han Solo’s DL-44 in Star Wars, Zoe’s Mare’s Leg in Firefly, or the M41-A Pulse Rifle from Aliens us sci-fi/gun nerds will always have something awesome to entertain us.