Yesterday during the passage of the parking lots bill, Rep. Verne Smith (D-Chicagolandia) decided that instead of offering a principled opposition to the bill that instead he would slur the NRA on the House floor and generally act the fool. Here’s a firsthand account of his actions:

Rep. Vernon Smith (D-14) spoke against the Parking Lot bill (HB 1065). He got up and said, “If you can’t beat ’em, join ’em”. Then he put on a trucker hat backwards, said that was the closest thing he had to an NRA hat, pulled out a toy revolver and shot it a couple of times in the air, and then said he was a member of the NRA, he wanted to return to the “Wild West”, he believed in signing up babies for membership in NRA, and he thought we should all pack Colt .45s in our kids’ school lunches.

He said that when he gave his tithe at church, he thought his reward should be a gun. He said when he goes to the casinos, instead of winnings in money, he wanted his winnings in guns.

Update: In comments, Ashley provides a link to an article that covered the story as well as a great picture of Verne Smith staying classy.  Click the link for the article, here’s the picture (credit Evansville Courier Press) with bonus Rule 3 violation! 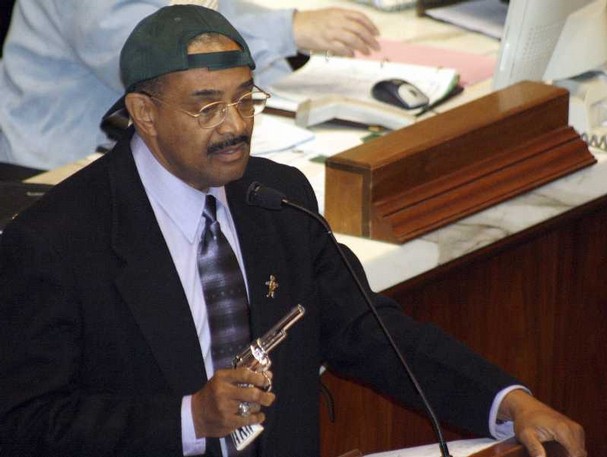