In December of 2017, I had the opportunity to take Citizens Defense Research’s flagship class, The Armed Parent/Guardian, or TAP/G for short. I had been meaning to take this class for some time, so when I found out they’d be in SoFla, I decided to sign up. Full disclosure, I paid full price for the class, however I have known both instructors, John Johnston and Melody Lauer, for quite some time and count them among my friends.

By the time I took TAP/G, a large number of my friends and industry acquaintances had already taken it, and recommended it very highly. The class is split in two days, Day of Training 1 is a half day of classroom lecture and a half day of range time, and DOT2 is an entire day of range time. The question that I really wanted an answer to is whether or not this class is really relevant to someone who doesn’t have kids. If that’s your question, I’ll answer it right now and you can go back to scrolling Instagram for gun bunnies: yes, yes it is. Even if you don’t have kids the class is quite useful.

As I mentioned above, the instructors are John Johnston and Melody Lauer. While John has an impressive training resume and holds several instructor qualifications, he is most likely best known as the host of Ballistic Radio, a popular firearms podcast. Melody Lauer is a full time firearms instructor and mother, and even appeared on some daytime TV show explaining the complexities of babywearing and carrying a gun. Both instructors bring their unique backgrounds together to create a course that is both engaging and informative.

DOT1
The class begins with lecture, which is used largely to set up the context in which the class is presented. The “target” demographic for this class is of course private citizens who carry a gun as a part of their daily activities, and who might be placed in a situation where they are with someone whose safety is their responsibility. This could be with a minor child, or as I applied a lot of the context of this class: a Bumble date (if you don’t know what Bumble is you’re either married or living under a rock). For me, the most interesting part of DOT1’s lecture portion was the concept of transitional spaces. A good example of a transitional space is a parking lot, or the waiting area for a train/subway car. These aren’t spaces where people stay they’re places that people transition through. Transitional spaces are also the place where you’re most likely to be the victim of a violent crime outside of your home, which is why the class places pretty significant emphasis on this.

After the lecture the class went to the range, where two of my favorite things happened. We were given a very comprehensive safety brief, which included the “crash landings” that would get you kicked out of class for safety violations. I always appreciate this in a class, because I’ve had far too many guns pointed at me by fellow students over the years to really want to continue to do that. 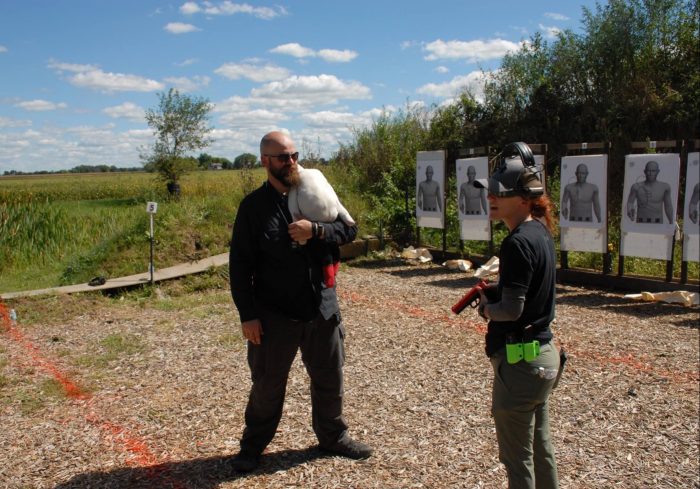 Second on the list of briefings before rounds started cracking downrange was the medical briefing. This is an essential part of any firearms class in my opinion. It involves designating primary medical providers as well as the evacuation plan in the event someone does catch a hot one. If you’re an instructor and this isn’t part of your class, you need to fix yourself.

On to the shooting portion of the class, which was interesting. On DOT1 we shot the FBI qual, which is shockingly easy. In fact, I would say that the majority of the marksmanship challenges presented in the class are fairly trivial in nature for an average shooter. My definition of “average” being “USPSA B-class or better.” If you’re not at that level, you may find some of the shooting in the class to be difficult. I didn’t, and that’s not a knock on the class. If I wanted to take a class that was going to make me better at shooting, I’d take an Ernie Langdon class (which I in fact did).

A very interesting, and also somewhat unusual aspect of the live fire portion of the class was the emphasis placed on two things: shoot throughs and misses. In fact, if I had to pick a central portion of the marksmanship portion of the class, it’s “get good hits.” Periphrial hits and misses were analyzed to a level of detail that I wasn’t really expecting, and hadn’t encountered in other purely shooting classes. 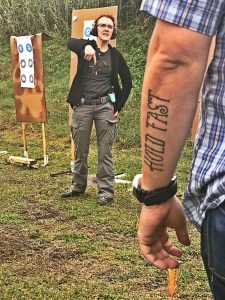 DOT2
The range the second day incorporated the sandbaby or a backpack as we discussed and trained on various methods to move a small child to safety, or control them while firing strong hand only. Without giving away all the class curriculum, this presented an interesting challenge. It became a lot more interesting when you added a living participant to the drill, whose job it was to pull on your hand and act like a terrified kid. There were some other drills that incorporated live participants which I found quite useful.

DOT2 was also where my only real complaint occurred. You know “that guy?” The one who always asks the dumbdick questions that aren’t really relevant to the course material, but he’s either 1) trying to sound cool, or 2) so clueless he doesn’t realize he’s asking nonsense questions? Yeah, that guy. We had one of those in the class, and on DOT2 he derailed the class a bit. I mentioned this to John and Melody afterward, but I felt like they could have done a better job controlling for student behavior and not let us get off the rails like that. But really, that’s my only complaint.

Summary
Should you take TAP/G? Absolutely. If you’re serious about using a gun for self defense and have people in your life who can’t/don’t carry, I believe that this class is an excellent learning environment. I guarantee you’ll come out of smarter than you were before, so long as you go in with an open mind. I strongly recommend TAP/G to all of my readers. Go visit Citizen’s Defense Research to find a class near you.