Click bait title right?  Obviously I don’t mean using a 9mm to hunt Mr. Buck; but, I recently had to dispatch a gravely wounded deer with my CCW and in doing so I came away with some insight worth sharing.

First a quick yarn about how the events unfolded.

I was on my way to work in pretty heavy fog, when out of nowhere a deer jumped in front of the car ahead of me and tried to wrestle.  As expected the car won.  Amazingly the driver didn’t stop, instead they  kept going (how do I know they didn’t have insurance…) even though their headlight and portions of their bumper where now occupying the road.  Normally I wouldn’t have stopped either, but the deer came to rest directly in front of the bus entrance to my son’s elementary school.  It was early in the morning and the buses hadn’t started running, but I knew if I didn’t move the carcass no one would.  I didn’t want school buses dodging a deer in morning school traffic, nor did I want small kids to start their school day witnessing bloody gore.

I parked my truck, donned my work gloves, and head over to the “dead” deer.  Only when I touched the poor thing it became apparent it wasn’t dead.  It made the most heart-wrenching, misery-filled, noise I have ever heard, as it slung blood all over me.  I tried to help it up, but its back was broken, it was bleeding from its mouth and its breath was accompanied by the sound of gurgling.  Death was imminent, the only question was how long would it suffer and how was I to move it off the road without hurting it more.  I used to hunt, so am not opposed to the killing of animals for food or even sport, provided it is a quick clean kill. But this… this was anything but clean and quick.  What I was witnessing was brutal and tough to witness.  It didn’t take long to weigh my options.  I drew my CZ P-07 and put two 9mm, 124 grain +P Remington Golden Saber’s into the deer’s head.  It expired quickly and I was able to move the animal before a child could witness the horror.  As I drove home to take another shower and change clothes a couple of revelations started to brew in my mind.

This was the first time I had ever used a 9mm round, of any type, on a living creature.  The ultimate goal was met – a swift extinguishing of a life – but, neither bullet had penetrated the opposite side of the skull.  Both bullets were entombed in the brains and hard bone on the skull.  I was equally bewildered on how hard it was to make the shots; even though the muzzle was less than 18” away.  This was due to the simple fact the suffering creature was flailing about and not stationary.

What about a self-defense situation?  The human skull is rather bony and hard – some are harder headed than others.  If we look at the actual human skull we will notice the effective target area is rather small.  I have heard some say it is similar to a 3”x5” index card; while others claim it is credit card sized, similar to the upper A on a USPSA metric target. 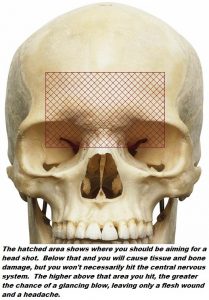 Either way the target is but a small portion of the entire head.  While a head shot might be highly effective, it is not an easy shot too make.  Making repeatable hits on a 3”x5” index card located 15 yards away while stressed not child’s play.  Now imagine that same index card is  attached to a helium balloon and moving about!  We should easily understand that a head shot is not a gimme!  “Just shoot’em in the head” is the mantra of those that are ill-informed and the fools at the gun shop.  Don’t let Hollywood fool you; a head shot does not always equal a positive end to the hostilities! 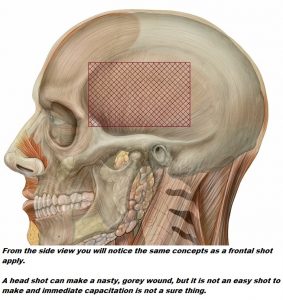 The other thing worth noting is the simple fact the bullets were trapped.  Given the distance to target I was expecting to see a violent exit wound.  Not so.  The facts are simple: a weapon designed for CCW, one truly small enough to easily conceal, will always be a poor man-stopper.  And by easily conceal I mean normal clothes, not a Secret Service suit custom tailored for the concealment of a hand howitzer or a UZI!

As I mentioned above, my goal was attained – a quick end to the suffering of the poor creature.  But it does bear questions that aren’t easily answered.  Questions that each CCW holder should ask themselves.

I also advise each of you to seek out guidance from an experienced trainer; one whose teachings are based in CCW reality and not the needs of a multi-man tier 1 assault team.