This is the third installment of Project Lumen and things are moving along nicely.  Today I offer up data on a cheap piece of crap, a former superstar and a modern LED light that is all polymer to keep cost and weight down.  As with the previous article, I will review the notes and data points from the first three lights I tested.

One thing common aspect with each light tested is the fact everyone should perform a similar test in THEIR home.  Don’t fall into the trap of presumption.

To be frank, this is a 100 lumen turd.  The illumination was underwhelming, as was the switch activation.  In full disclosure I bought this flashlight for $9.00; that is NINE dollars, spent for the sole purpose of illuminating my tinkering with my Lee Pro 1000 Press.

As with the ProTac LED and Microstream the color was a vibrant white hue and overall provided a minimum of light to do the job.  That is not what made it underwhelming.  The part that was truly stupefying was that it had twice the lumens of the Microstream with only about 10% of the light improvement.

As with the Microstream it was better than nothing, but only by a slim margin.  I included this flashlight in the test because it provided a data point.  It led to a wasted test day.

This is the first of three incandescent flashlights I am testing.  It has 78 lumens and is an outdated, discontinued model.  It was included here for the sole purpose of comparing incandescent illumination to LED. 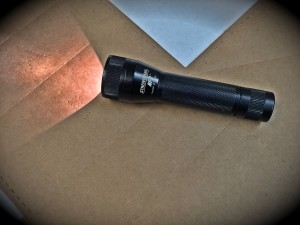 The good part: it didn’t affect my night sight at all.  Unfortunately the light provided was sub-par.  The yellow coloration was a non-issue, but the overall light quality was poor and cast a lot of shadows.  I actually cleaned the lens, installed new batteries and tried again the next morning.  Poor lighting was the same result.

It is worth noting that this light was considered to be at the top of its class when I bought it…. in 2004.

With 275 lumens out of the C4 LED, the Streamlight PolyTac was the brightest light tested so far.  The light quality did not disappoint.

Let me briefly discuss the actual PolyTac itself.  As the name describes, the entire light is polymer.  It is probably not the light you want to take on an excursion to douchebagistan, but for EDC it works splendidly.

Sidebar:  I actually keep this light installed on my AR, attached with a Viking Tactics mount.  Yes I know, polymer light on an AR.  Whatever; I live in this thing called reality.  If I have to use my AR in defense, especially more than a few shots, I will be famous.  I keep the light on there for one reason –   varmints on my property.   Since I don’t plan on a Chupacabra returning fire, I feel safe in my choice.

Now, back to the discussing the light quality and effect…

Upon initial activation the brightness of the flashlight did affect my eyes briefly.  This was the first time this has happened during the test and my reflex was to close my eyes and squint for maybe five seconds.  I think this is important.  When identifying someone inside of your house, five seconds is an eternity.

The light quality was, as I said above, great.  No weird shadows.  The LED and reflector design cast a smooth, even light across the area of coverage.   Just awesome illumination – once my eyes adjusted.   Out of those tested so far, this is the one I would choose today.

Will the brighter lights cause greater reflex squinting?

Will the squint time increase with the lumen output?

Will the 550 lumen Nitecore cause me to convulse?

Stay tuned for the next episode we test an old tech Mag Light 3D Cell light, the discontinued Streamlight TL-3, maybe a Streamlight Stinger and the 550 lumen Nitecore SRT3.