Skip to content
9mm And .45 ACP Models Silencer Ready Out Of The Box With Threaded Barrels And Suppressor Sights 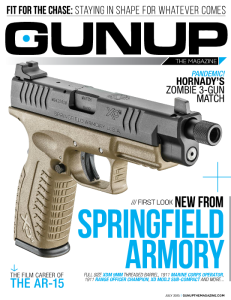 “Shooters are buying suppressors in record numbers,” observed Springfield Armory® CEO Dennis Reese. “”Shooting pistols suppressed is not only enjoyable, it’s also safer for shooters and bystanders both due to the greatly reduced noise levels. It was important to us to make it as easy as possible for our customers to use a suppressor of their choice.”

The 5.28” barrel extends ¾” from the front of the slide, so no adapter is required – customers can simply attach a silencer directly to the existing barrel threads. The 9mm XD(M)® Threaded model features the standard ½” x 28 threading while the .45 ACP model is cut with a .578” x 28 threads per inch pattern. Both models ship with a thread protector cap to prevent damage while shooting unsuppressed.

Both front and rear sights are custom designed and tall enough to ensure visibility over most standard suppressor bodies. The steel three-dot sights are finely serrated on the shooter-facing sides to minimize glare and provide a more crisp sight picture. The front sight rises .365-inches above the top of the slide for unobstructed sight picture visibility.

“We decided to offer the suppressor models in both 9mm and .45 ACP to meet a variety of customer shooting preferences,” says Reese. “.45 ACP is naturally subsonic, and a perfect choice for suppressor use, but we’re also excited about 9mm options. Our counterparts in the ammunition business are making some great and affordable 9mm subsonic rounds, so we wanted to build a gun for that caliber too.”

Both new XD(M)® Threaded models ship with three magazines. The 9mm versions hold 19 rounds each while the .45 ACP magazines fit 13.

The new XD(M)® 4.5” Full-Size Threaded offers everything customers desire in a full-size pistol, just in a quieter package.