I mentioned earlier on my Facebook fan page that now that I’m back from training, I’m in the best shape of my adult life, including my teens. Or, as a comment on yesterday’s post put it, “reborn hard.” That’s true. To put it in perspective, when I left I was doing about 40 pushups in a minute, 30ish situps, and running a mile and a half in 12 and change. Now I’m doing 60+ of pushups and situps, and running my 1.5 in 10 flat. 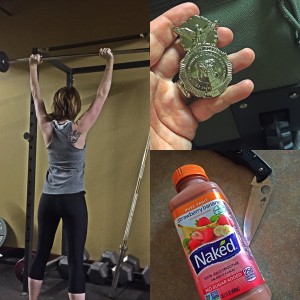 There are other metrics, like weight loss and percent body fat, I’ve dropped about 35 pounds and I’m under 11% body fat. These are good things because they mean I’ll likely live longer and whatnot. However, what I want to talk about today is how they affect my ability to defend myself as a civilian. Because I’ve talked about fitness a lot in the past and how it’s important, but instead of just beating ya’ll up and saying “get in shape fatty mcfatterton” I want to talk about what being in good shape gives me.

It gives me options, and options are a good thing. Depending on the situation, I have the option available to simply flee, which is always pretty awesome from a civilian standpoint; you win every gunfight that never happens. Or, if I’m not carrying a gun for whatever reason, I have some training in going hands on; I’m not BJJ warrior but I’ve got a couple of good strikes and I can thrown down an Americana pretty well. I don’t really want to go hands on with people (that’s why I carry a gun) but it’s a good skill to have. Options are good. Of course, there’s always the deadly force option if I am carrying a gun.

As your fitness level decreases, your options go away. That’s not necessarily a condemnation, because a 65 year old woman with a dickey hip isn’t going to have the same self-defense options as a 25 year old triathlete. However, if you’re 33 and your only option is to basically go straight to deadly force because you can’t run 400 meters without dying and you lack the physical strength to create distance by pushing an attacker off, then you’ve put yourself in the relatively unfortunate situation of having to shoot someone who maybe didn’t need to catch a bullet. This goes even further back to something Tam was talking about last month, namely how to manage unknown contacts. That’s all about creating options, because unless you’re a psycho, you don’t actually WANT to shoot someone.

I don’t want this post to be another “get in shape blah blah” because people don’t listen to those. It tends to just fly in one ear and out the other. What I want is for people to take a hard look at your self-defense options. Are you limited to going straight to deadly force? If so, ask yourself “why?” If you are limited, and it’s because there are holes in your training and skill set, good news! You can fix that. If the holes are in your physicality and abilities, you can fix that too, but it’s a lot harder.

I learned a lot about blind spots in my self-defense strategy over the past six months. My ground game needs a ton of work, and so does my intermediate/striking distance game. It’s important that we recognize weak spots in our skill set; especially if you’re serious about self defense or do this kind of stuff for a living.