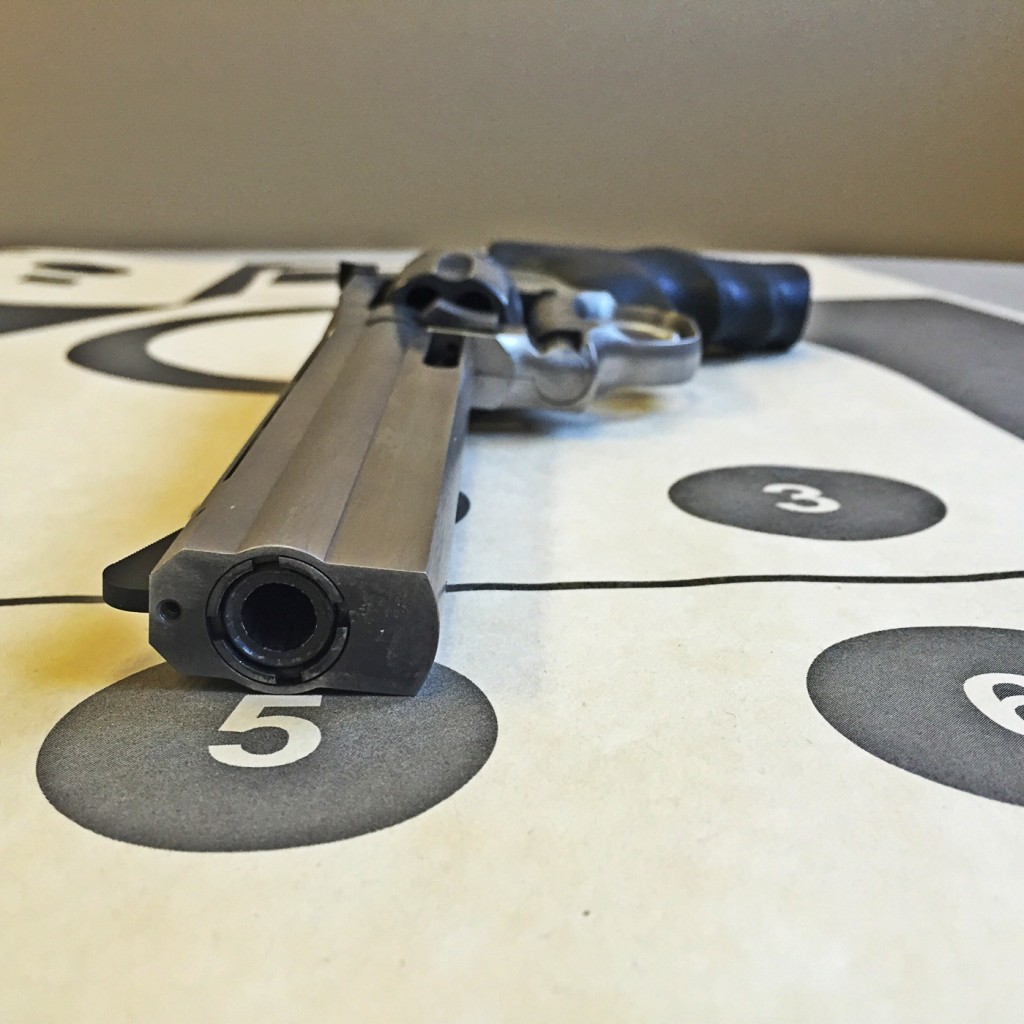 Dan Wesson revolvers occupy an interesting place in the world of enthusiasts. The company itself was founded by the great grandson of the original Daniel Wesson, and Dan Wesson II’s roundguns eventually gained a respectable cult following in revolver circles. Their party trick was an interchangeable barrel system, which allowed the end user to swap barrel lengths at their leisure, making a 6-inch silhouette gun into a 4-inch duty gun or a 2-inch carry gun with relative ease.

The company went through a long period of financial troubles starting in the early ’80s, which lasted until 2005 when they were purchased by CZ-USA. Initially, CZ didn’t do much with the Dan Wesson brand, they announced some new products would be coming, but instead of a big flashy launch like you’d see from other companies, they focused on ensuring the product was right before they pushed it out. Now, after a decade of hiatus, you can buy a new Dan Wesson 715 again. 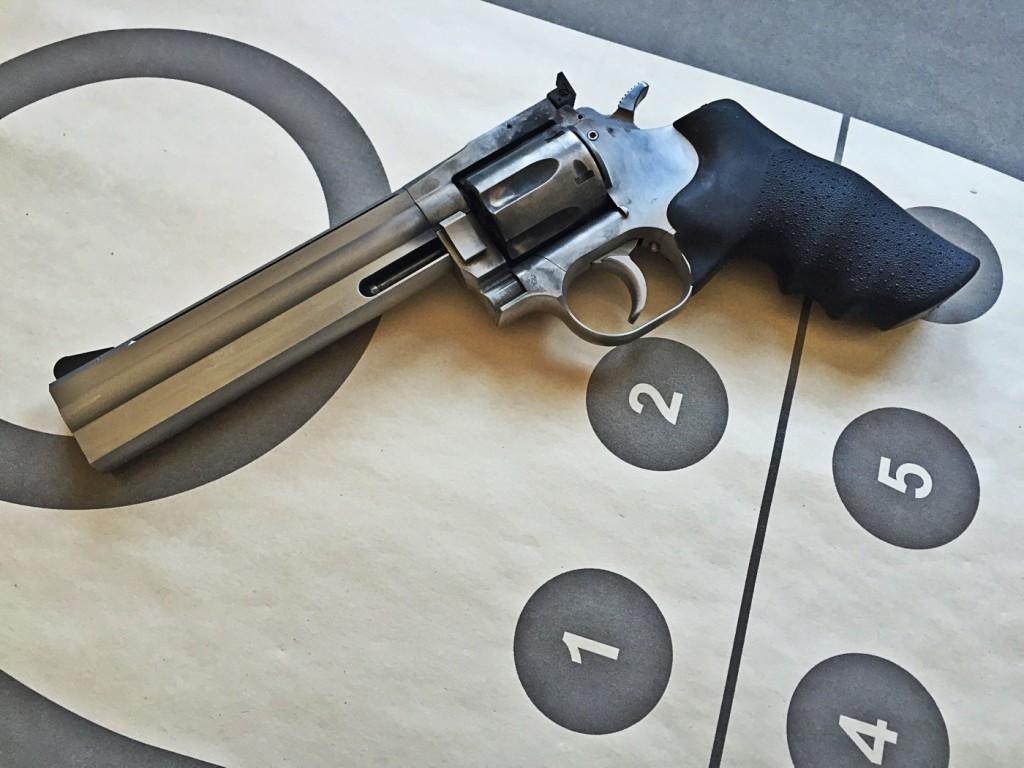 Overview
The Dan Wesson 715 was the Cadillac of the lineup, and the current model is faithful to that heritage. It comes from the factory with a 6-inch vent-rib barrel with a full underlug, finger-grooved rubber stocks, and excellent target-style adjustable sights. With the 6-inch barrel, it weighs exactly 48 ounces unloaded, which in units you’d actually use is 3 pounds. That is a lot of gun. The DA trigger pull is 10 pounds, with a relatively short length of travel, minimal stacking, and a very positive reset. It also has an overtravel stop, which is a nice feature for a gun like this. SA trigger pull was 4.5 pounds, which was heavier than I was expecting. The one part of the gun that is unusual is the location of the cylinder latch. As you can see in the photo above, it’s located on the crane. If you’re familiar with Smith or Ruger revolvers, that will take some getting used to.

Accuracy Testing
My memory of the Dan Wesson 715 always associated it with being a very accurate gun, so with that in mind I put it to the test. Step 1: get a bunch of different loads that I know from previous tests are accurate. Step 2: shoot them at standard 50-foot bullseye targets and see how well they group. Here’s the ammo I used:

The first three loads I fired slow fire for groups, trying to squeeze maximum accuracy out of each. The last, the Federal Gold Medal, I put to the test under match conditions, shooting strings of timed and rapid fire with it. We’ll get to that in a bit. First, the DoubleTap: 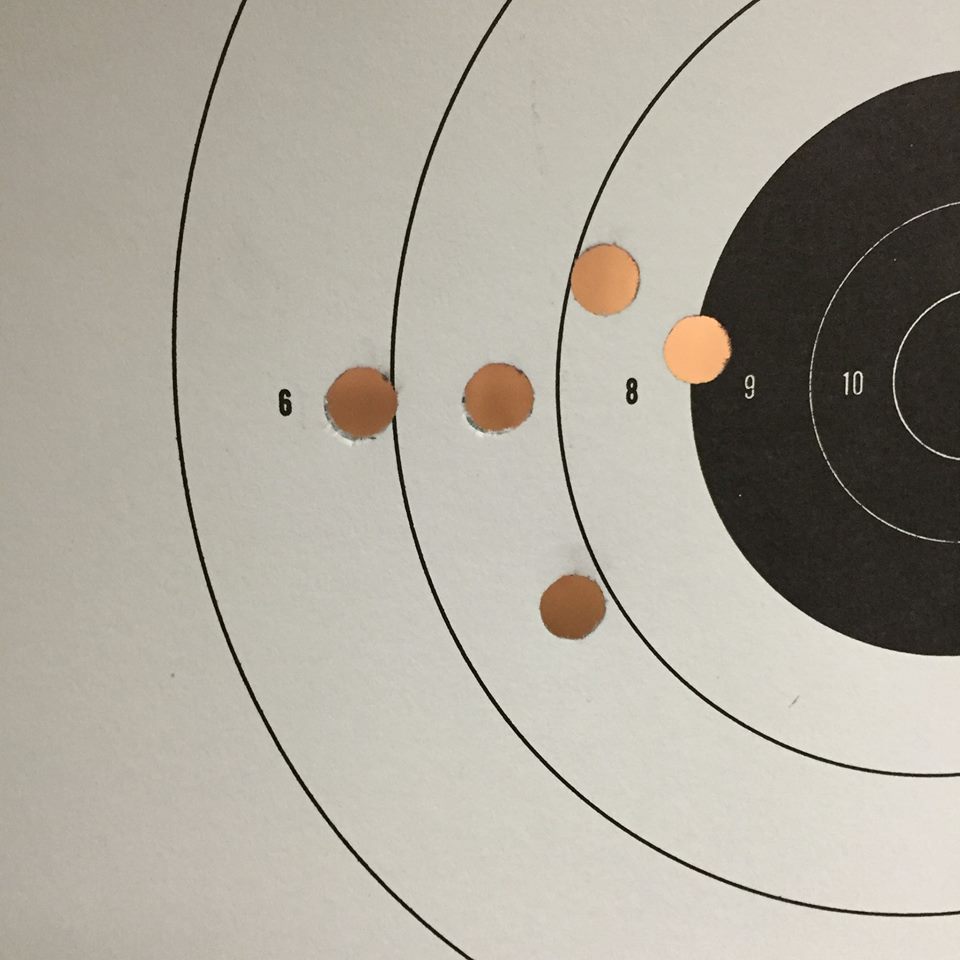 Using a six o’clock hold on the black, the DoubleTap 158-grain LSWC shot into 1.7 inches at 50 feet from a freestyle unsupported hold. This load has always shown tremendous accuracy from all my guns. The downside is that because the madmen at DoubleTap are pushing an all-lead bullet at 1000 FPS, this round can get kind of smokey in a hurry. In fact, I’ve had this load tie up other revolvers from carbon and lead build up after just 50 rounds. That wasn’t an issue for the Dan Wesson 715 however. It also did an excellent job of eating up the recoil of the hard hitting (for a .38) DT loads.

Up next, I went to one of my favorite “budget/accurate” loads. This is the Magtech 158-grain LSWC at standard .38 Special pressures. 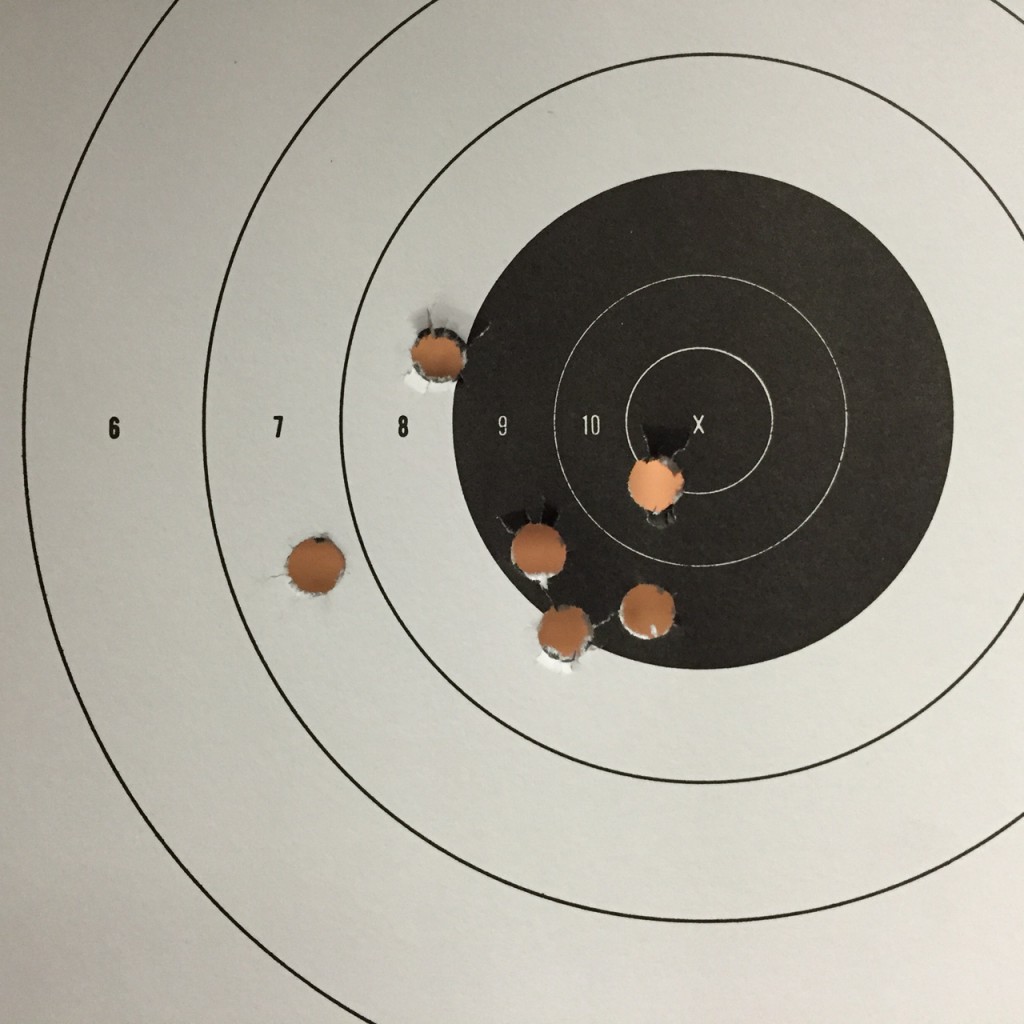 The Magtech had a decent showing, a slightly-over-2-inch group at 50 feet. Felt recoil was like shooting a popgun, because 3 pounds of Dan Wesson steel laughs at the puny recoil impulse of standard pressure .38. Beyond that, there’s not a lot to say about this load. It’s relatively cheap, it shoots well, and it’s not as smokey as the DoubleTap.

Then it was time for the fun stuff: full house .357 Magnum in the form of American Eagle’s 158-grain jacketed soft point. 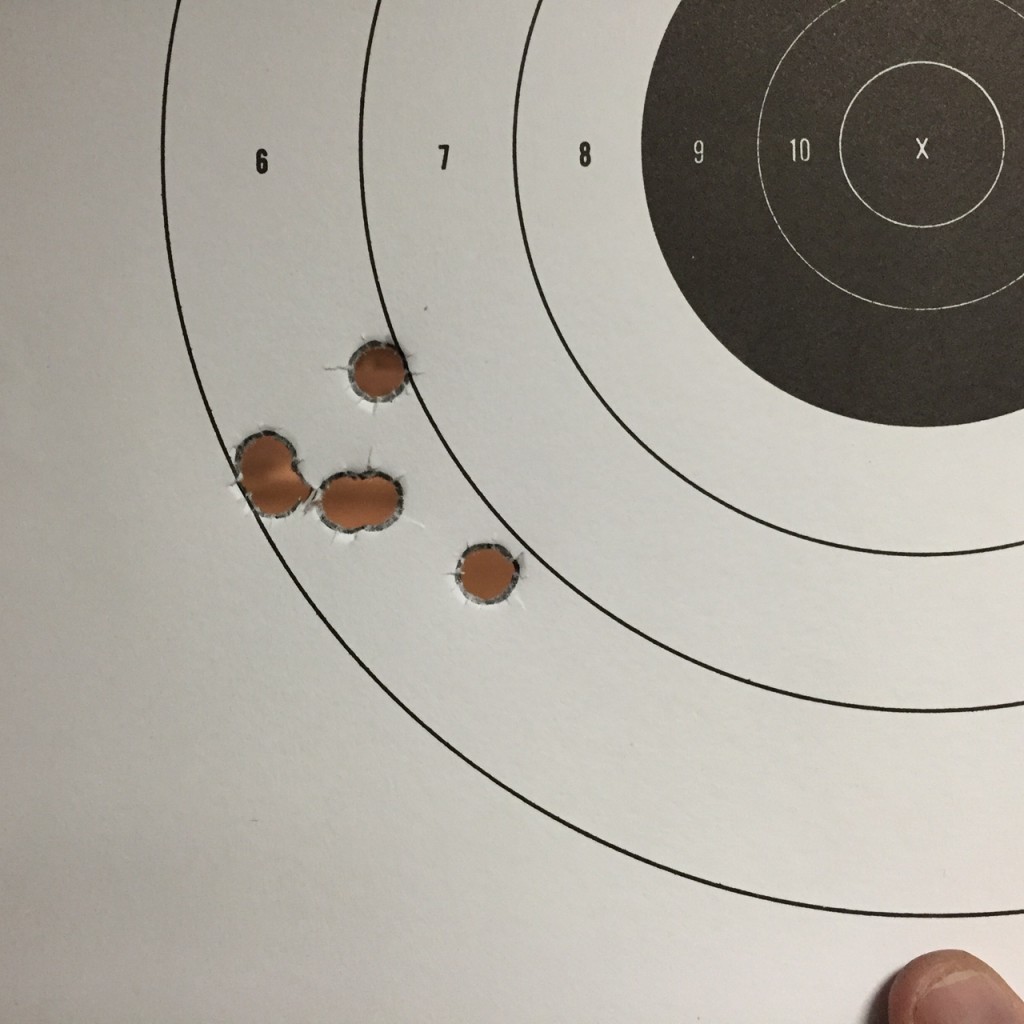 I took my time with this one, because even with doubled up ear pro, shooting full house magnums at an indoor range can be a bit of an experience. When it was said and done, the American Eagle turned in the best group of the day, 1.4 inches at 50 feet, standing unsupported. Recoil was exactly what you’d expect from a 3-pound gun firing full house magnums: it was there and you noticed it. But the accuracy that the gun turned in with these rounds was very impressive, and I think an excellent testament to the gun’s ability.

After shooting the magnums, it was time to put the gun on the clock. I sighted it in for 50 feet, and set up to shoot timed fire. In standard bullseye courses, timed fire is 5 shots in 20 seconds, or about 4 seconds per shot. I expanded the par to 24 seconds to shoot 6 shots, and loaded it up with Federal Gold Medal Match. I shot four strings of 6 shots of timed fire, 24 shots total. My score was 225-12x out of a max possible 240. Here’s one of the targets: 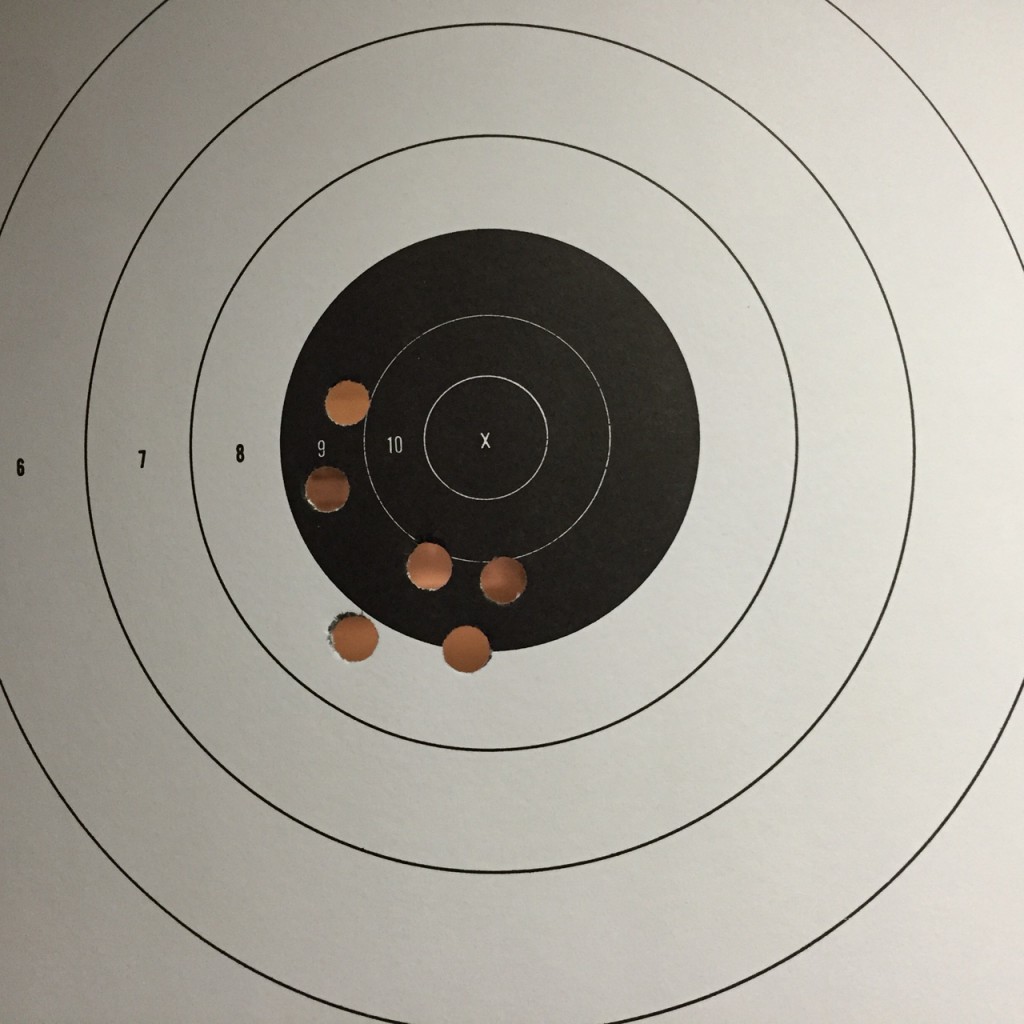 That’s also a 2-inch group, shot timed fire at 50 feet. Using the Federal Gold Medal Match, this gun is an absolute laser beam. Shooting Gold Medal Match wadcutters out of this was an amazingly pleasant thing to do. The gun makes a wee little “pop” noise, it wiggles around a bit, then that big front sight is right back where you left it, and the gun is all “let’s go again!”

What We Like
First and foremost, I like that Dan Wesson is back, and that they’re making revolvers again. The world needs more good revolvers, because having S&W and Ruger is great, but there really isn’t a viable third option for shooters if you want a quality DA revolver. As far as the gun itself, it does everything I want a revolver to do. It’s accurate right out of the box, it has great target sights right out of the box, the trigger is even pretty good without me messing with it. That’s last part is special, because the first thing I do to either a Ruger or a Smith when I get them is start messing with the trigger. You could probably improve the trigger on the 715 as well, but it’s honestly good to go already. 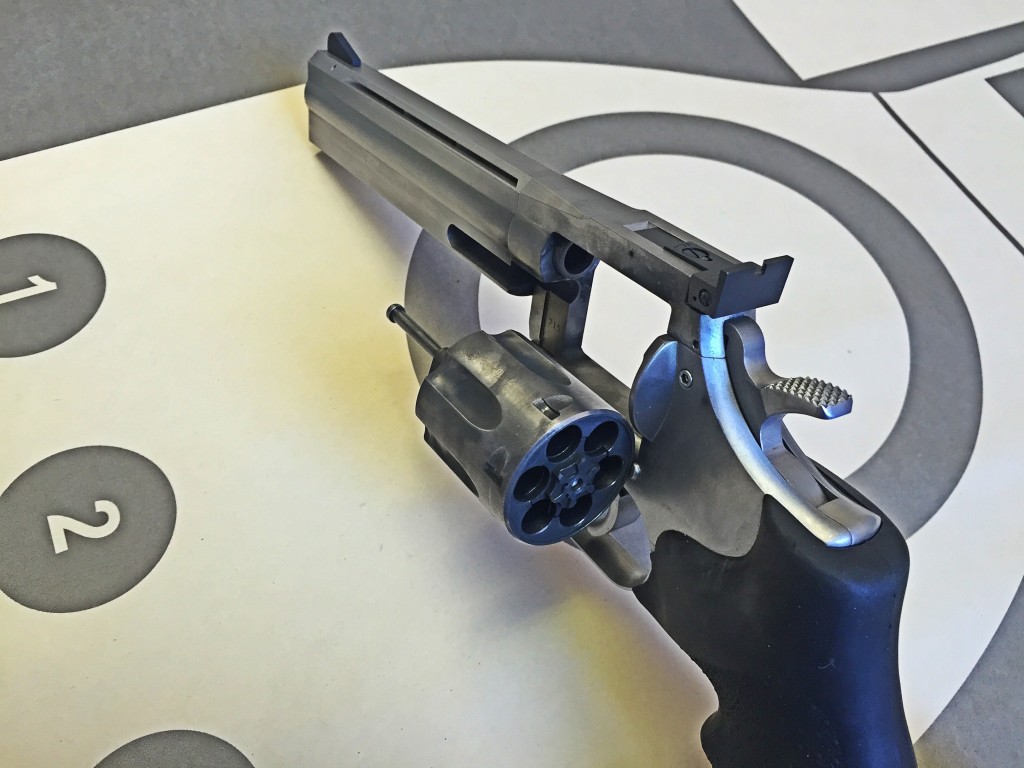 What We Don’t Like
I’m going to say it, and I’m sorry: I don’t like the cylinder release. It’s in a weird place. Located on the crane like that, it makes it impossible to do a reload without changing hands, which for me means I’d have to change my reload. Now, it’s not actually a bad thing, because when I messed with it in dry fire, I found that I could get a pretty quick reload using the hand swap method. It’s just different from what I’m used to. The grips have to go, but that’s because I hate finger groove grips. I would need to bob the hammer as well; with as high a grip as I want, the hammer actually hits my hand during the DA pull.

As far as mechanically, there’s absolutely nothing wrong with this gun. It fed everything, shot everything accurately, the only issues I have are really more of personal preferences from shooting revolvers for so long.

Technical Stuff
According the internet, the Dan Wesson 715 uses speedloaders that also fit S&W K-frames, which is good. I don’t have any K-frame loaders around the office to test that, because shockingly I don’t actually own any K-frames right now. I can say for a fact that Security Six and GP100 loaders don’t work. However, Safariland lists the same model of loader for the K-frames as they do the 715, and they’ve never led me astray before.

Holster fit might be a a bit trickier. I tested it with various Smith and Ruger holsters around the office, but that enormous underlug prevented it from fitting any of those. Speaking of the barrel, this gun ships with the 6-inch version as I mentioned above. You can actually buy different barrel lengths direct from CZ’s web store.

I don’t think I’d be brave enough to try one of the pre-2005 barrels on this gun, I’d just stick with the new manufacture barrels.

The Verdict
I’m optimistic here. A quick check of Gunbroker shows two brand new in box 715s for sale for about a grand each, which means they’re out there in the wild and people can actually buy them. That’s good news. The fact that this gun is accurate and doesn’t need a trigger job and can be had for $1,000 and change means that if people buy them, we will have a viable third option to Smith & Wesson or Ruger. It shoots great, it takes readily available speed loaders, and it comes with phenomenal sights. Plus, you can be the ultimate revolver hipster when you take it to the range. “Is that a Smith & Wesson?” “No,” you’ll smugly reply, “it’s a Dan Wesson. You probably haven’t heard of it.”