WEST HARTFORD, Conn. (July 25, 2014) – Colt’s Manufacturing Company marks the 200th birthday of founder and American industrialist Sam Colt with the donation of a commemorative pistol to The Museum of Connecticut History at The Connecticut State Library. The commemorative pistol is a Colt O1991Z model, a direct descendant of the original Colt 1911 model. It is specially engraved to mark the 200th birthday celebration, with designs including the Colt dome, Sam Colt’s bust and the bicentennial 1814-2014 date. Colt’s Manufacturing Company symbolically donated serial number 200 to the library’s museum on July 19 at the Colt 200th festival in Hartford. 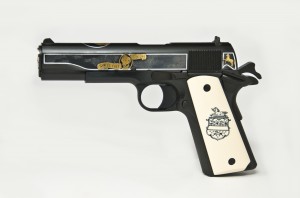 “We are honored to donate this special commemorative firearm to the outstanding collection already housed at the Connecticut State Library,” said Joyce Rubino, Vice President of Marketing at Colt’s Manufacturing Company. “This is an historic occasion not only for our company, but for the entire firearms industry and manufacturing and industrialization in America. An inventor and industrialist, Sam Colt’s patented revolving cylinder design was a crucial part of America’s industrialization and evolution of the assembly line, and his legacy has been a part of our country’s history ever since.”
The Museum of Connecticut History at Connecticut State Library houses one of the finest collections of early Colt prototypes, factory models and experimental firearms in the world. In 1957, the Colt Patent Firearms Manufacturing Company Factory Collection was donated to the library’s Museum of Connecticut History. The 200th commemorative pistol will now join this collection.
The pistol donation at the birthday festival in Hartford was part of an entire year’s worth of Colt’s Manufacturing Company’s birthday commemorations for its well-known founder. It has also been very important to the company to celebrate Sam Colt’s birthday with its customers throughout the country. In the spring, a random sampling of thousands of customers across America participated in a brand survey from Colt. The responses gave company leaders greater insight into customers’ opinions, preferences and brand perceptions of Colt and its products.
“The survey results were very helpful in keeping us closely connected with our customers,” said Dennis Veilleux, President and CEO of Colt’s Manufacturing Company. “Customers told us they are passionate about the Colt brand, that Colt has a well-earned reputation for producing reliable products, and that Colt and its customers hold true to traditional values built upon honesty, hard work and love of country.”
The company has also been celebrating with fans on Facebook with giveaways throughout the month of July. This will culminate with one winner being selected from thousands of Facebook entries to win a Colt Single Action Army® Revolver. There is still time to enter the contest by visiting Colt’s Facebook page at Facebook.com/ColtFirearms.
Colt’s Manufacturing Company plans to continue commemorating its founder’s bicentennial birthday with more special announcements and promotions to come in 2014.

About Colt’s Manufacturing Company LLC
Colt’s Manufacturing Company LLC is one of the world’s leading designers, developers and manufacturers of firearms. The company has supplied civilian, military and law enforcement customers in the United States and throughout the world for more than 175 years. Our subsidiary, Colt Canada Corporation, is the Canadian government’s Center of Excellence for small arms and is the Canadian military’s sole supplier of the C7 rifle and C8 carbine. Colt operates its manufacturing facilities in West Hartford, Connecticut and Kitchener, Ontario. For more information on Colt and its subsidiaries, please visit www.colt.com.