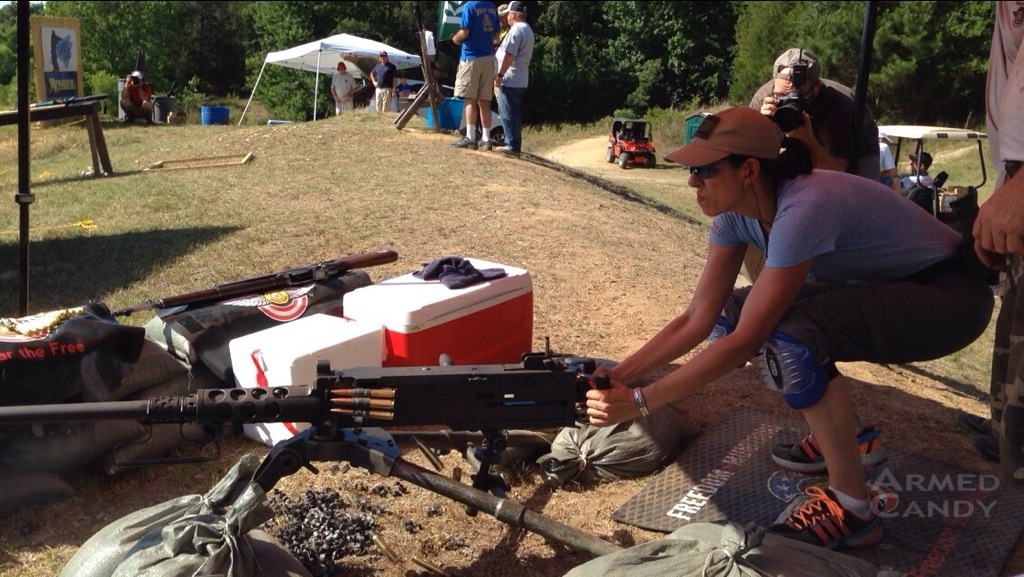 The last stage of my first day at the Freedom Munitions Memorial Match was filled with multiple 3 gun clichés. Firstly, they included a “pick-up gun”. A pick-up gun is a surprise firearm, often provided by a sponsor, which is meant to throw a shooter for a loop. Often the shots with the pickup gun are are not scored or they only affect one’s time. They are not usually anything one can prepare for, but they can be a great opportunity to get behind some pretty rare weapons. Also, we were provided ammo by the title sponsor for our shotguns, which was staged in a dump barrel.

Our fourth stage included six .50 BMG rounds out of a Ma Deuce with the gun set on full auto. These shots were to be aimed at an old truck, set about 150 yards down range. Once the shots were fired the RO would then start the clock. So really, this pick-up gun was purely a way to get shooters starting in an odd uncomfortable position. Fortunately, early in my training, one of my coaches had taught me to “make ready” by arranging my body (especially my feet) so that when the buzzer sounded, I’d be ready to run. This advice worked perfectly, for the Ma Deuce stage. I planned to shoot the big gun with one (kneepad clad) knee on the ground and the other foot ready to push off and go. However, as always happens when the time comes, I ended up shooting the Ma Deuce in an odd squatting position and then sprinting to the first stop in the stage. Luckily, this was a bit faster than the original plan. 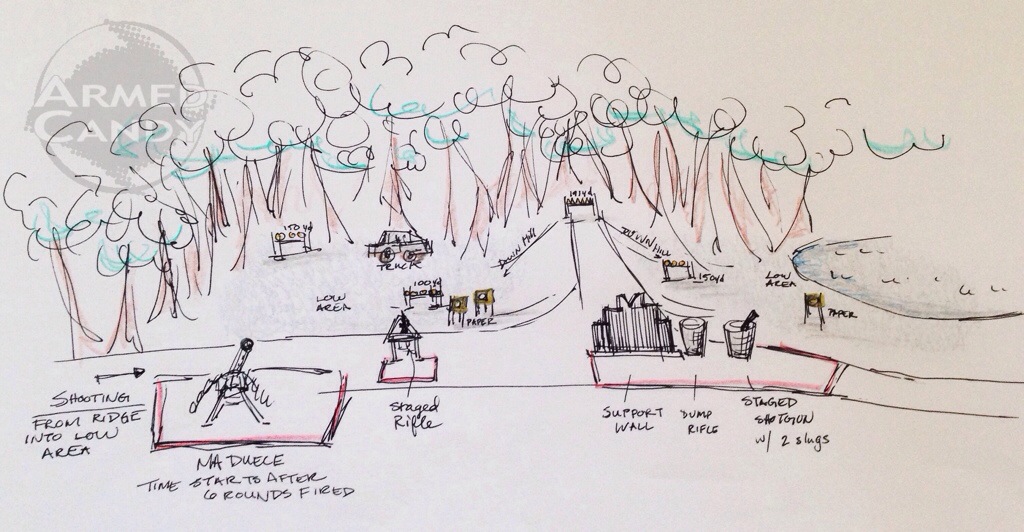 The stage was set up on a piece of land that could best be described as a hill in the shape of an upside down T. All of the shooting occurred along the top line of the T and, for the most part, was aimed at the lower land. The first part was shot with my rifle, which was staged on a table in front of a small shooting box. Once I left the Ma Deuce and ran to this box I was to pick up my rifle and aim at two paper targets at about 15-20yards, a plate rack at 50yards and another plate rack at 150 yards. Then I would run my rifle over to a wall that could be used as a brace and shoot at a plate rack set at 190+ yards. I found it helpful to take a sight picture from this wall, through my optic and decide where to rest my gun for these shots during the walk-through. While this plate rack was set on an even plane with the wall (at the furthest point of the T) the plates were small triangles and were set up in the shade so we were shooting in the sun, they were virtually impossible to see. Add to this the fact that the plates were still visible when knocked down and you can probably understand why even some of the pros felt deflated by this stage.

After this there was another plate rack for rifle shooting and then some shotgun targets. Or shotguns had been staged in a barrel loaded with two slugs from Xtreme Bullets (title sponsor of the match). These shots had to be “aimed” but they didn’t have to hit the paper. They would only add to each shooters time. This is an atypical way of including a sponsor’s product in a stage. Usually a pick up gun would be loaded with the ammo. The question was raised, “what if my gun doesn’t cycle the stuff?” This is very important to the pros, with their finely tuned equipment. They spend a considerable amount of time in practice, figuring out exactly how specific ammo handles in their guns and they rarely change things up mid-match, when it comes to match ammo. (I had been shooting slugs by Xtreme Bullets all day, so I wasn’t concerned, but I still found it a very reasonable question.) The RO couldn’t come up with a good answer for the question.

In the end, I timed out on the triangle plates. With my 5MOA red dot, and the targets being shaded by the trees while I shot under the glaring sun, it was almost impossible to see the targets, let alone know if I’d hit any. I was very disappointed to not finish the stage and decided that on the second day of the match, I would make a point of not using ALL of the par time on any more stages.