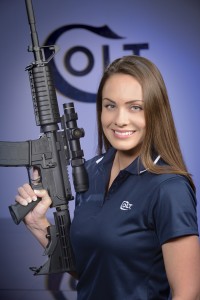 “Maggie did an outstanding job defending her IronMaiden title,” said Joyce Rubino, Vice President of Marketing for Colt’s Manufacturing Company. “This is a difficult match, with stages that can take several minutes to complete, so we are very proud of the skill and athleticism Maggie showed.” Reese competed with a Colt LE6920 through the match’s rifle stages, where round counts were well over 100, and Mother Nature added even more difficulty.

“The Colt 6920 was very reliable as I navigated not only through the stages, but also the heat and lots of dust,” said Reese. “The match was very physically challenging, and I walked away with some burns and bruises, but those were well worth it.”
Reese’s next competitions include the USPSA Area 8 Championship in Fredericksburg, Va. and the USPSA Handgun Nationals in St. George, Utah.
Follow Colt on Facebook at Facebook.com/ColtFirearms to keep up with all of Team Colt’s competitions this year.