Your goals as a shooter are going to influence how you train; at least they should if you’re training smartly. For example, a person whose only interest is self-defense will train differently than someone whose interest is IDPA; an IDPA only shooter will train differently from a Bianchi Cup shooter, etc. There are ways to cross over your training though so that training for X directly benefits Y. 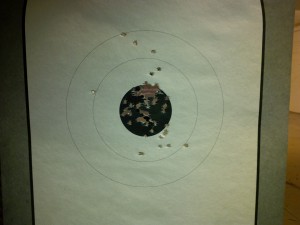 Let’s first look at two “specialist” matches, Bianchi Cup and Steel Challenge. The top shooters in these matches all agree: the best way to train for them is to get “knee deep in brass” shooting the stages over and over again. For Bianchi Cup, add in a healthy dose of shooting 2, 4, and 6 shot strings for maximum accuracy against various par times. Training for Steel Challenge is very sport specific, it places a greater emphasis on the draw and transitions than any other shooting sport. Training for Steel Challenge can offer benefits across disciplines in those two areas. The same goes for Bianchi Cup, where the extreme emphasis on accuracy can absolute benefit your shooting skills in other sports. If you can hit a four inch dot at 25 yards, you probably won’t struggle with the accuracy requirements of an IDPA match.

Training for USPSA will absolutely make you a better IDPA shooter. In general, USPSA places higher demands on a shooter’s technical skills than an IDPA match will, and while IDPA ad the element of a concealment garment to the game, the transition from USPSA to IDPA is not difficult. If you focus your skill building on USPSA and then go shoot an IDPA match, you’ll do fine as long as you remember the rules.

All of the shooting sports will improve your skills as a defensive shooter. IDPA gives you the chance to practice with concealment garments, and of course USPSA, Bianchi Cup, and Steel Challenge all improve various aspects of your shooting skill. No, none of these games will teach you tactics, but they will help you ingrain your gun handling skills so that under stress you don’t stand there like a duck in thunder trying to get your gun out. Of course, we haven’t even touched on 3-Gun, which is probably the best bang for your buck in pressure testing your skills; training for 3-Gun just makes you into a gun toting superman. To be really successful you have to incorporate training for three guns, and physical fitness.

Match specific training is important if you’re prepping for a serious match like Steel Challenge or Bianchi Cup. But don’t worry too much about it if you can’t shoot all the specific stages. It’s never a bad idea to train to be faster and more accurate in general.