At SHOT Show 2013, Sig Sauer announced a version of the MPX Carbine that would have a 6.5 inch barrel and come standard with a permanently welded 9.5 inch long muzzle brake. The get up looked like this: 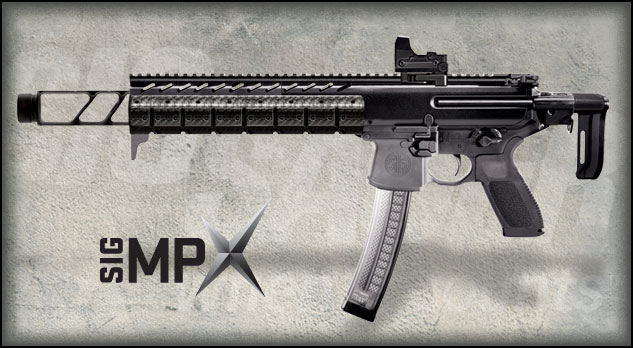 The ATF took one look at the gun and said “that’s not a muzzle brake because those are clearly the baffles from a suppressor, and we’re saying that device is officially a suppressor.” Usually when that happens, companies will return to their offices, tails tucked between their legs, duly chastised. But not this time. Not Sig. In fact, Sig has gone the opposite route, deciding instead to spit in the tyrant’s eye sue the ATF.

[Sig Sauer’s] suit, filed in the U. S. District Court of New Hampshire, states that it submitted a rifle, with its muzzle brake, to the ATF on April 4, 2013 for evaluation. The device is described as 9.5 inches long and permanently attached with a weld to a 6.5 inch barrel, making the overall barrel length 16 inches.

The ATF responded, by letter dated Aug. 26, 2013, that the device is constructed as a silencer component commonly referred to as a “monolithic baffle stack,” the suit states.
“Welding it to a barrel does not change its design characteristics or function,” Sig says it was informed by the ATF.

The news of this lawsuit from Sig comes on the heels of the ATF’s recently letter declaring that the Sig Pistol Brace is not a stock, regardless of how it’s used by the end user. It seems to be part of a trend from Sig on pushing the limits, and honestly, it’s one that we here at Gun Nuts support wholeheartedly. In a perfect world, there would be no NFA list; in a nearly perfect world the only things on the NFA list would be actual machine guns and destructive devices. I’d love to see the NFA deregulated and suppressors and SBRs moved off; and maybe that will happen some day.

In the meantime, we wish the best of luck to Sig with this lawsuit. The analysis of the merits of the suit are interesting, because if the muzzle device does not suppress sound in any way, can it really be classified as a suppressor? If the case is interpreted purely on the performance of the muzzle device as it is attached to the barrel, then it’s clearly not a suppressor. However, the ATF seems to think that because it could be readily made into a suppressor, that it should be classified as one from the get-go.