In news that will shock many, today Sig Sauer discontinued a massive number of guns in their product line. All handguns other than the classic P-series guns such as the P226 and P229 have been dropped from the lineup, effective immediately according to a source inside Sig. On the rifle side, all long guns other than the new MPX submachine gun have been dropped as well. A Sig Sauer insider was quoted saying “Look, we all know what you want is more P226s and P229s, but for years we kept making diamond plate rainbow compact 1911s. We’re really sorry about all of that, and we’re going to go back to making the awesome guns that you actually want.” 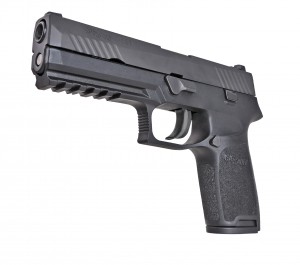 The abrupt cancellation will definitely affect the availability of Sig’s new striker fired polymer pistol the P320 which was in the process of shipping to dealers this week. Inside the Sig factory, CNC machines once dedicated to the production of P238s and Molon Labe 1911s were taken offline, scolded for being naughty, and brought back online to machine slides for new production Sig P229s in 9mm. The real question in this announcement is whether or not the news from Sig will affect the just launched P227, their double stack .45 ACP pistol that rounded out the classic P-series line-up. While not a true classic, it fits within the spirit of the classics, and our inside source reports that it will stay around.

In other news, Sig discontinued all calibers other than 9mm for the P226, P229, and P239. Again, our inside source was quote as saying “These guns were designed for 9mm, and 9mm is just better than .40 anyway.” Additionally, the DAK trigger system has been banned from new production guns, and all P-series pistols will now ship standard with Sig’s Short Reset Trigger. Any plans or references to the DAK trigger have reportedly been taken to the fires of Mount Doom and destroyed by BJ Norris and Caleb Giddings.

Early news of Sig’s plans have been greeted with wide-spread acceptance from the serious shooting community. Noted firearms trainer Rob Pincus was quoted as saying “While I only shoot Glocks these days, it’s about time that Sig dropped those other guns. People want the classics, because the classics are the best. And no more diamond rainbow finishes!”