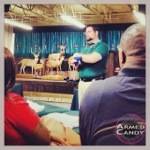 This weekend the National Shooting Sports Foundation brought their series “First Shots” to the Atlanta area. 11 locations signed up to host classes, which were offered almost hourly from Friday morning until Sunday evening. In total the event saw a registration of about 500 people, although they could have accommodated up to 900. The full class that I observed on Saturday morning had more women than men, and not all the women were there at the request of their men. A number of student groups were families, some of whom brought their teenage children.

While the classes are conceived and promoted by the NSSF they are taught by range staff, giving students a local source they may later return to for more information. Since this was my first observation of a class taught at the gun store and range Adventure Outdoors in Smyrna, GA, I was impressed by the efficiency of the team as they moved students through the learning process.

William, one of Adventure Outdoors instructors, began the class with the basics. He covered firearm handling safety, state laws and briefly established a working vocabulary of handgun parts and shooting fundamentals. After the classroom portion students lined up downstairs for range time. Each student watched the NSSF safety video, a thorough explanation of range safety and what-ifs, and each student was also allowed time in a shooting bay with an NRA certified Range Safety Officer for one-on-one trigger time. Though the students may have stood around waiting for their turn for a while (only two bays were allotted to the class while the rest of the range served typical saturday morning traffic) they all left with a feeling of safety and satisfaction.

Here are a few more things I noticed about how Adventure Outdoors ran the class: