There is no magical Goldilocks Zone of shooting speed. Being faster is never a bad thing. If someone makes an error while he’s going so fast then the issue is the mistake, not the speed.

From this post at Pistol-Training which also addresses one of the issues with the current state of pistol instruction, namely that “people other than me are wrong.” 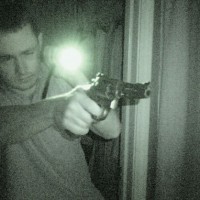 I’d like to focus in on the one statement about shooting speed – because it also applies to accuracy. There is no such thing as too fast, and no such thing as too accurate. There are times when it’s important to sacrifice accuracy for speed, and times where it’s important to sacrifice speed for accuracy. It’s a very poor instructor who insists that the speed they shoot at is the “best” speed. Similarly, it’s a poor instructor that teaches only their level of “combat accuracy” as necessary.

But here’s the rub, and it’s something we’ve touched on here before. Time. It takes time and dedication to get faster and more accurate, and the level of speed and precision required to win IDPA Nationals is probably a lot higher than the level required to be competent enough to defend yourself. The reverse of that statement though is that if you’re preparing at a very high level, you’ll be even better equipped to defend yourself. This leads to the inevitable discussion on how you should allocate your training time, which is a really fun discussion of risk acceptance; but is also beyond the scope of today’s post.

The bottom line for today’s post is simple: there’s no such thing as too fast or too accurate. Unless you’re going so fast you can’t get situationally accurate hits; or if you’re being so accurate you’re going too slow. Examples: you’re shooting 0.18 splits but can’t keep all your shots in the 0/-1 zone of an IDPA target, that might be too fast. Or if you’re shooting one hole groups on an IDPA target at 7 yards, but taking 1.00 second splits. The key here is that you have to be able to analyze and understand the situation you’re in, whether it’s a match or self-defense. We see a lot of first time match shooters pick one speed on a stage and shoot every target at that speed, whether or not it’s an appropriate speed. If you watch top shooters navigate a stage, you’ll be able to hear their splits change depending on the target engagement.

The shooting sports are a great trainer about thinking with a gun in your hand; yes you get a walk through and time to mentally prepare for the stage, but that doesn’t negate the value in learning to change your speed while you’re actually shooting. I encourage everyone to not rely on gun store wisdom like “a slow hit beats a fast miss” or the equally overused “slow is smooth and smooth is fast.” Instead, get out there and actually shoot. Do drills that require you to transition from hard to easy targets and back and forth. Learn your own speeds, then push those speeds.