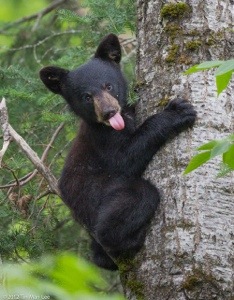 Have I told you about my bear hunt?

First, you should know that I’ve never pointed a firearm at anything with a heartbeat, let alone a cute furry animal.

Second, I’ll admit that this was no “hunt” and it was technically over before it began, but it was an exciting moment in my gun-wielding life and I hope you enjoy it.

A few weeks ago I was leading an event in the north Georgia mountains and yes, I was carrying a walkie talkie. A woman from our group approached me and was very concerned about two other women who had gone on a hike at dusk. The two hikers had left the grounds and headed deep into the Chattahoochee National Forest. The woman telling the story had been walking along the road near our site, when a truck approached her. They told her that the women were headed into an area known to be heavily populated by black bears. Those in the truck had tried to warn the women, even offered them a ride, but the women had avoided the truck and contact with those inside.

I immediately went into protective mama mode. I radioed to the care taker of the property on which we were staying, because he would normally be the one to handle such matters. I waited then tried again, but got no response. I went to some of the staff in a panic and they did nothing to calm my fears. Yes, there were bears in those woods, yes a mama bear would use deadly force to protect its cub, no, none of the hikers were armed.

I told the staff that I didn’t think my Mini would make it up the dirt paths into the wooded area but that I felt we needed to go get the women. One responded, “we can take my truck!’ Now my protective instinct turned inner redneck. I told the two members of the staff that while I had intended to abide by the rules of this gun-free facility, my 9mm was in my range bag, in my car and if neither of them had gun, that might have to do. “What’s it hold?” One of them asked. “16 rounds” I responded, as if this was a typical day for me. “We’ll meet you around back where my truck is parked,” he said.

I grabbed my whole range bag, so that no one would be alarmed and jumped in the truck. Because I had been following the rules, by magazines were empty. We started up the hill and I am loading rounds. The guys are telling me how in most cases a few shots into the air will scare off a black bear. This sounds like a best case scenario, since I know a 9mm round probably won’t do more than annoy a bear… If I hit it at all.

Just as we got to the point were the path narrowed and went from a drivable dirt road to a wide hiking path, the two women came walking out of the woods. I lowered my now loaded and chambered CZ. At first the ladies didn’t see me in the passenger seat at when we slowed to talk to them, they turned to hurry away. Now it was clear why the first truck had not been able to make contact. The women said everything was fine and that they hadn’t run into any trouble, let alone bears. We put the truck in reverse and I was forced to stand down. Honestly, I’m glad I didn’t have to shoot a bear, but I can’t say I didn’t get a little excited at the idea.