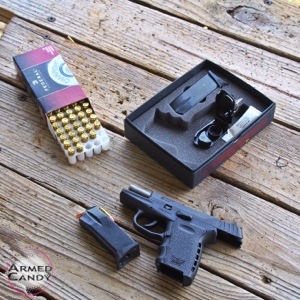 Almost immediately after being approached by the SCCY rep to review the CPX-2 9mm concealed carry pistol, I met a woman who had just recieved one of these little guns as a gift. Frankly, she was miserable.

She had gone shooting only a handful of times, total, before recieving her own gun, and, though she could not remember what she had been shooting those first few times, she claimed, she had been a pretty good shot. Now that she was shooting her new SCCY, she said, she couldn’t hit a darn thing. After watching her pull the trigger a few times, the answer was obvious. She was unclear about what this gun was capable.

When I got the CPX-2 out to the range, the first thing I noticed was the weight. I’ve held other lightweight guns, but they are usually, all-around smaller. While the proportions of this pistol are good for someone like myself, with long fingers, I felt that if I were going to make concealability concessions, I would go with an all-around, smaller gun. After pulling the trigger a bunch, I had one big realization. This is not a gun for a beginner. Without a better-than-average knowledge of grip and trigger control, the CPX-2 will not be a satisfying experience. Further I was left with deep red welts in my hand from the “recoil minimizing” cut-outs in the back of the grip.

All-in-all I didn’t dislike the SCCY CPX-2, at the range. But then I got the gun home for a cleaning…

Here is a little video of my range experience with the CPX-2, and stay tuned for the conclusion of this review, on Monday.