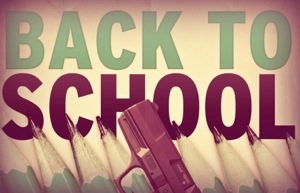 Ok, Georgia, we’ve got a problem. Yesterday, for the second time this week, a kid brought a gun to school and it’s only Wednesday!

Most recently, it was a preschooler, the day before it was an 8th grader in a charter school. In both cases, another student found out and informed a teacher, who quickly removed the gun from the child’s possession and no one was injured. Both students will face disciplinary action and a letter will be sent home with parents. However, it doesn’t seem that these children had any malicious intent when they came to school packing, nor did they know that they might be breaking some school rules.

As a writer of the softer side of gun stuff, I must address the factors related to children and guns. However, as a former nanny I know better than to tell any parent how to do their job. Then again, as a gun owner in Georgia, I just want to say to these parents, “YOU’RE DOING IT WRONG!”

It’s clear from your lack of safe gun storage, that you don’t care about your family’s safety, and you certainly don’t care for the safety of your firearms investments. So I appeal to you as an appreciator of 2nd amendment rights, step it up!

Georgia is a great state for firearms ownership. There is very little the state government has to say about you taking your five year old or your 12 year old shooting. But I bet you haven’t! If you had, even spoken 10 words to your kids about guns, they probably wouldn’t have considered a handgun a good specimen for show-and-tell. If you had utilized a safe of some kind, your child wouldn’t have ended up on the news, (at least not for this infraction). What upsets me the most though, is that YOU are fueling the anti-gunners. They cite your mistakes when they argue for gun control, and I really don’t think that’s what you’re goal. So stop it!! End Rant.