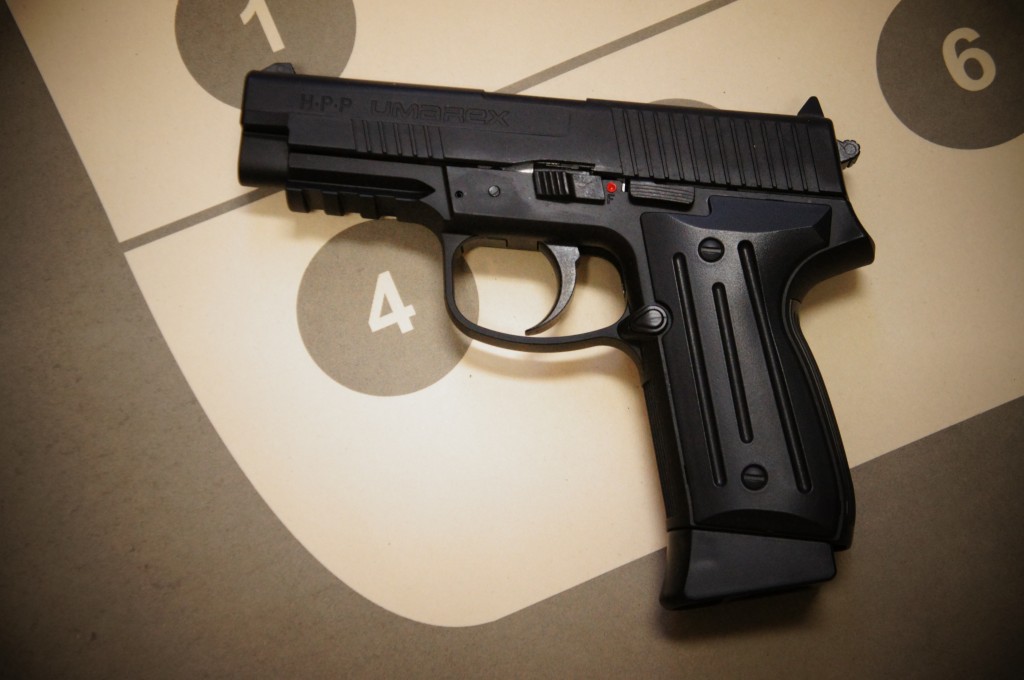 I’m fairly certain this is the first time I’ve ever reviewed a BB gun here on Gun Nuts, but there’s a first time for everything. Umarex sent over this cool little CO2 powered BB gun as part of a care package before our visit to Germany next week. It’s a gas blowback BB pistol that shoots the steel BBs that were such a staple of my, and many other people’s childhoods. This was before the days of airsoft, and I fondly remember getting my first BB rifle as a kid. The Umarex HPP is a bit more advanced than that.

The Good
It’s made out of metal, not plastic. You wouldn’t think that’s a big deal, but if you pick up the HPP with your eyes closed, you could easily be convinced that you’re hefting a small, compact semi-auto and not a BB gun. The controls all function as they would on a proper pistol as well, and while the safety is placed in an odd location, it does in fact work. The slide locks to the rear on the last round, and the slide stop will drop the slide and “chamber” a new BB when you put in a fresh magazine.

The Bad
The sights don’t put the BB anywhere near the center of the target. But that’s okay, because I can see the BBs in flight anyway.

The Verdict
Look, I’m not going to make the case that the Umarex HPP is a serious training tool to prepare you for victory in competition or to prevail during a fighting critical dynamic threat response while getting off the x. It’s not a cheap plastic toy like most airsoft, and you should observe reasonable safety precautions when shooting it. Make sure to have eye protection handy, and don’t shoot things other than proper targets.

So what’s it for? It’s for fun. Honestly, when I got this packet in the mail, I set up a little airgun range in my office and spent the day doing mag dumps until the CO2 cylinders were exhausted. I had more fun doing that than I’ve had going to the “for reals” range and doing “serious gun training” in a long time, because there is something inherently fun and entertaining about just shooting for the hell of it. That was the joy of shooting the Umarex HPP – blasting BBs into a carboard box from across the room. I have to give the Umarex HPP 6 points out of 6, because it was just plain old fashioned fun. If you want one, you can get a Umarex HPP CO2 BB Gun

for about $70.00 shipped to your door. It’s totally worth it, because the giggle factor is off the charts.